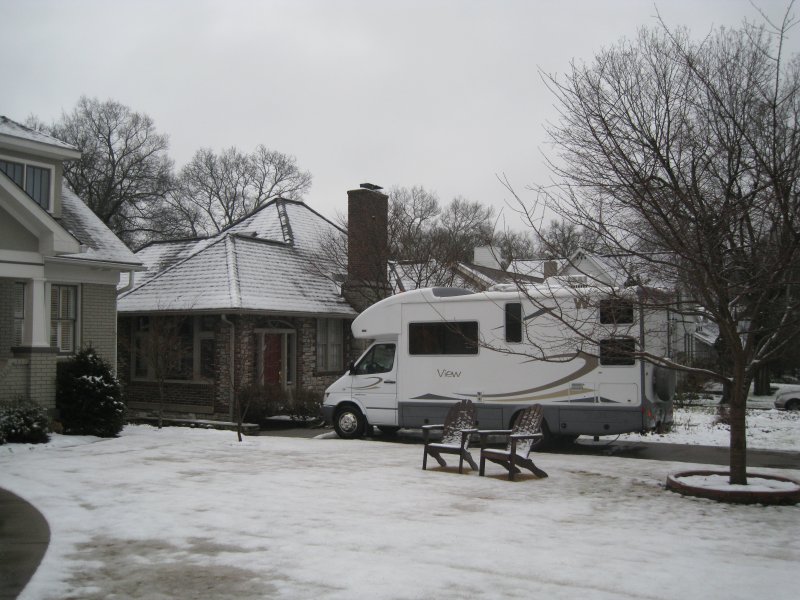 Troubles began early two days before our trip even started. On Saturday the 6th our water heater at the house sprung a leak. Not wanting to fill the basement with water, we got the  plumbers to come Sunday and install anew one. We left home at 7:15am Monday, driving the car up to Kenlake Marina in Kentucky to check on the Katy Leigh and get some stuff for the trip. It was cold at about 28 degrees at the boat. We got the stuff, and then discovered there was no battery power in the boat and worse 3" of water in the bilge. With no battery power the bilge pump wouldn't work. I changed the battery switch to the other battery, got power, and was able to pump out the bilge. Leaving a message for Rick, (our boat mechanic) we headed for Murray and Papa Smurf's storage unit. More trouble; the batteries would not start the View as it was so cold.  It was time to call for help. It took about 45 minutes on the phone with Coach-Net to grant approval to call a tow and get a jump start. It took about 10 minutes for the tow truck to show up. The View was parked nose in so the first attempt was with a portable jump unit. It barely turned the engine over once.   I was warned it would cost $45 extra to winch the View out of the garage so they could use the truck battery and jumper cables. The two men on the tow truck just pushed the View out with me at the wheel and in a couple of minutes it started. We got back to Nashville without incident and before it started to snow. Rick called to report the boat's charger had been switched off, so the battery had gone dead pumping out the bilge. The temperature had been as low as 10 degrees F which caused one of the sea strainers to leak a small trickle. He then recounted all the problems that other boats had suffered, with one boat sinking to the bottom. Other boats had solid ice in their bilge freezing the pumps. When the temperature rose the ice remained in the outlook hoses so the pumps couldn't pump the water out. Those boaters that don't believe in winterizing will change their mind next winter.