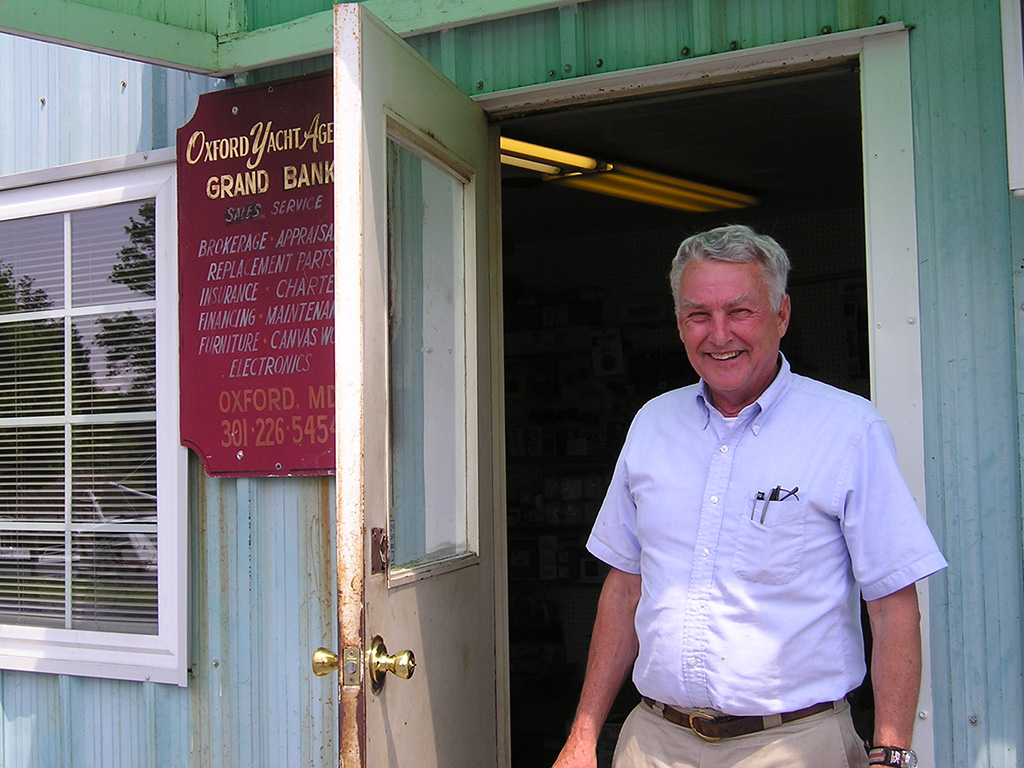 Our last day. La Trappe Creek was a beautiful place with deer walking in the water by the shore and a pair of swans. Some plantation homes also lined the shoreline.

When we got to Dickerson Harbor (part of Oxford Yacht Agency (OYA) the harbor was full of new Grand Banks and Eastbays. John Shanahan, OYA's owner asked me for our hull number. He said that he had sold that boat and then recounted the most amazing stories about it.

The boat arrived late in 1981 and there was ice in the bay. The purchasers bank was trying to get out of the deal as interest rates had risen to 22% since the rate had been set. The bank insisted that the boat must be commissioned by February 1st so John had to take his crew to Baltimore and install all the equipment that had been ordered. Then the bank sent a surveyor to be sure the boat was commissioned.

Tanks of antifreeze were used to run the engines in a snowstorm on the pier. The boat was to be named 'S.S. Sour Freddie' but the buyer missed his first couple of payments. OYA made the payments and assumed control of the boat under a recourse clause.

A few days later a big tough bushy bearded man (Frank) on a motorcycle rolled into the shop and said he wanted a 36 foot Grand Banks. An hour later he had paid for it and took the boat. It was named 'Francis Grier' after his mother who owned Oklahoma oil wells. More equipment was installed by John including the NeCo autopilot and a huge radar as the new owner liked to go out at night.

Two weeks later John was awakened in the middle of the night by a call from Frank who had run aground at high tide in the Christiana River at Wilmington DE. The tide there is 9 feet high so as it dropped the boat rolled on its side. Frank didn't think of taping the vents or closing the windows and the engine room filled with water. John drove up with pumps and a rubber dingy. Phil (who is retired but now helps out at Dickerson, see photo) ran a marina at Georgetown and took a crew of 7 men to save the boat.

They worked for 24 hours before the boat was afloat. It was towed to the marina and cleaned immediately. Today there is no trace of it ever having been partially under water. Frank died 8 years later and the boat was purchased by the marina on Lake Erie and renamed 'Katy Leigh'. Our boat is now in good hands with Phil. Our friend, Jack, very kindly picked us up at the marina and drove us to the Baltimore airport.

That's it for this leg of our Great Loop voyage. We'll be back late August for the next leg which we hope will take us to the Erie Canal in Upstate New York.