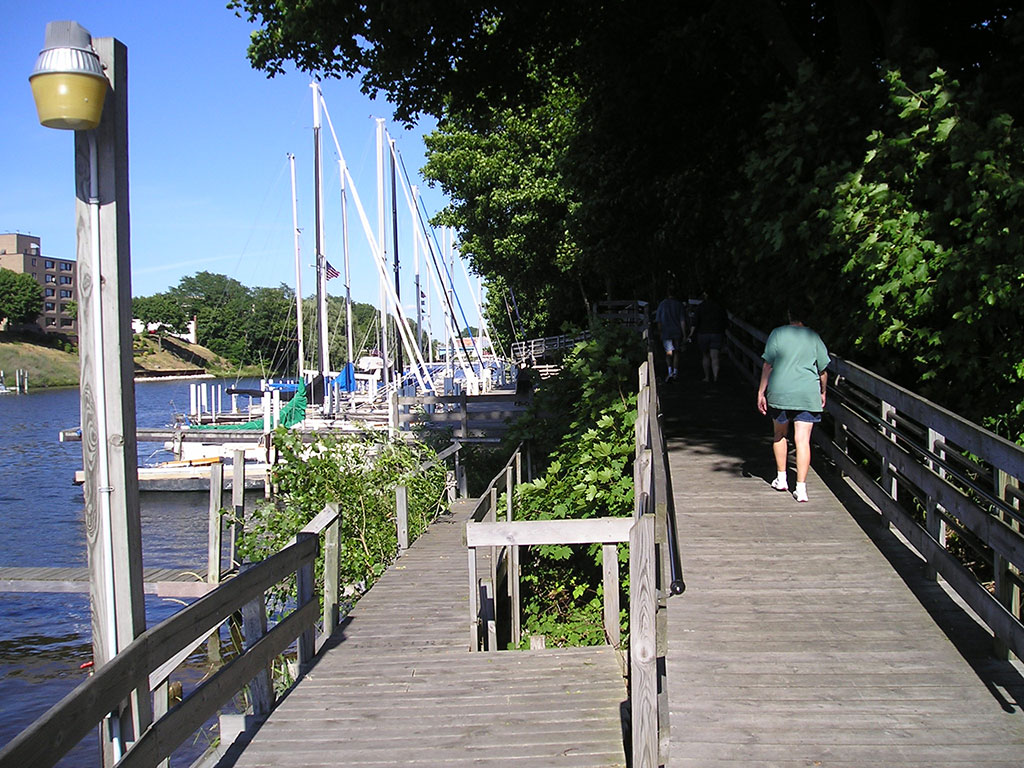 The weather forecast was good. We cruised 70 miles from Leland to Manistee leaving at 6:00AM and arriving at 1:20PM. We only had to change course twice to allow for the headlands and giant sand banks. There was no problem getting a slip even though this is the 4th of July weekend. This town is quite a bit larger than anything we have been in so far in Michigan. The town has a remarkable boardwalk beside the river that goes from downtown out to the breakwater and a park. It must be almost 2 miles long and runs between private properties and their docks on the river. At times it is elevated and clings to the bank of the river. There are historic markers all along the way. One of the most interesting was about 'Creeping Joe'. Joe was a sand bank on Lake Michigan. It was stable because of the vegetation. In 1884 the Democrats won the Federal election and to celebrate they lit a high bonfire on Joe and burned off all the vegetation. The winds then started moving the sand bank inland until homes had to be moved after 10 years and the whole town was threatened after 20 years; hence the name 'Creeping Joe'. At that point a railway was built beside the dune and the sand was shipped to Detroit for sand casting and to make glass. water's edge. Much of the downtown has been restored and appears to be doing well. Around 10:30PM there was a lot of crowd noise and boat horns. A boat parade was in progress. The boats were covered with hundreds of red white and blue lights. One had a lighted signs with USA on it. An open boat was full of people in white robes carrying torches. In the south lighted boat parades are held at Christmas time. In Michigan that is out of the question so the 4th of July is a great time. This is something to encourage at Kenlake. Lat 44.25 Long 86.33