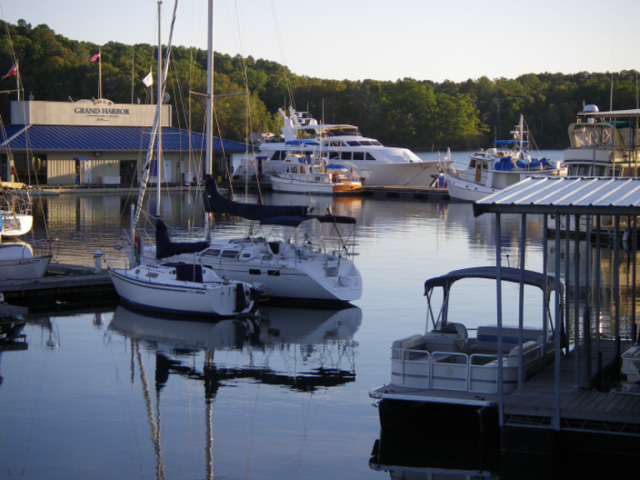 I was up at 6:00 to make the Rotary Club meeting at 7:00AM. The fog was so thick on the river you couldn't see more than a few feet. The Clifton Rotary has just 22 members. They were all worn out after having entertained 20,000 people at their  3 day Horseshoe Bend Fall Fair last weekend. They had concerts, fish fry, home tour, vendors, etc. There was no speaker the members just talked about what went right and what went wrong. They have been holding the same event for 24 years. Today was they day that stuff went wrong. Leaving the dock the bow thruster ran for a moment and then siezed up and would not run. When we arrived at Pickwick Lake I found the 300 amp fuse had blown. A diver is supposed to come tomorrow as almost certainly something is stuck in the propeller. I will drive the courtesy car to Aqua Marina and try and get another fuse. Then I had been smelling antifreeze for several days and found the pan under the generator had overflowed with antifreeze even though I had not run it for a week since I replaced the impeller. I could not find any leaks so called Northern Lights and was advised that more than likely when I went searching for the pieces of the impeller I failed to replace the "boot" over the heat exchanger properly.  The raw water impeller was pumping lake water into the engine and overflowing the system. I'll work on this again tomorrow. When we got to Grand Harbor Marina, 40 miles west of Florence AL we tied up beside a 125 ft yacht, "Bullish" that was taking on about 4,000 gallons of diesel. (see photo). It took 5 hours to pump that much. The pump would stop everytime the bill went to $1,400. We had dinner at Freddie T's. Freddie also owns the marina and was offering 10% off for transients. If all goes well in the morning we will get to Florence tomorrow afternoon.