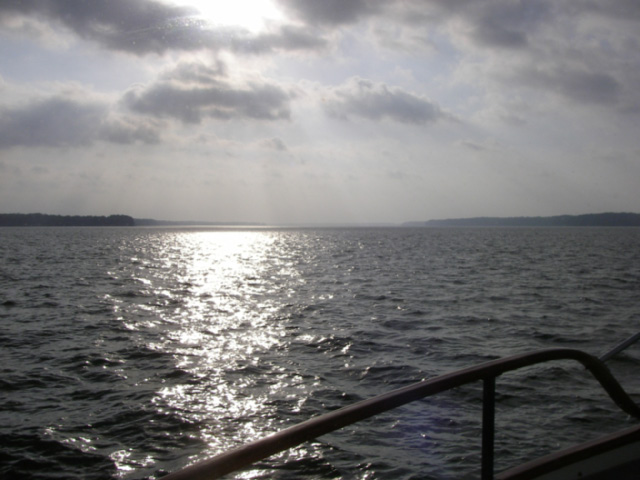 Just one lock today at the Wheeler Dam. We set out in in a partly cloudy sky that threatened rain all day (see photo). I learned that it's not a good idea to call this lockmaster on the cell phone. I called to see when we might get up. He chewed me out wondering why I didn't use the VHF Radio. Then when I did use the radio he refused to speak. It's not an easy life being a lockmaster. It was very windy all the way with gusts up to 25 mph. About an hour away from Decatur a call came over the radio from a "westbound trawler" that had lost power and was drifting into the railway bridge. There was nothing we could do to help but when we got to the bridge a 34 ft Marine Trader had dropped the anchor and a runabout was ready to tow the boat to the marina. We docked at 1:30 at Riverwalk Marina and had lunch at the Hard Dock restaurant. Then the trawler came in. It seems it had run out of diesel. The new owner did not know how to read the sight glasses. I made the same mistake when we bought the Katy Leigh in 1999.  This afternoon it was time to fix the generator which was leaking antifreeze. It took a couple of tries tightening up the clamps on the end covers of the heat exchanger but that is all it needed. So now everything is working again, at least until the next thing fails. I don't even count the AC pump which gets air in the line when we are running so we don't have air until I fool with the sea strainer and get some water to the pump. Tomorrow we cruise to Guntersville. Tonight it is raining hard and from looking at the weather radar it looks like an all night affair.