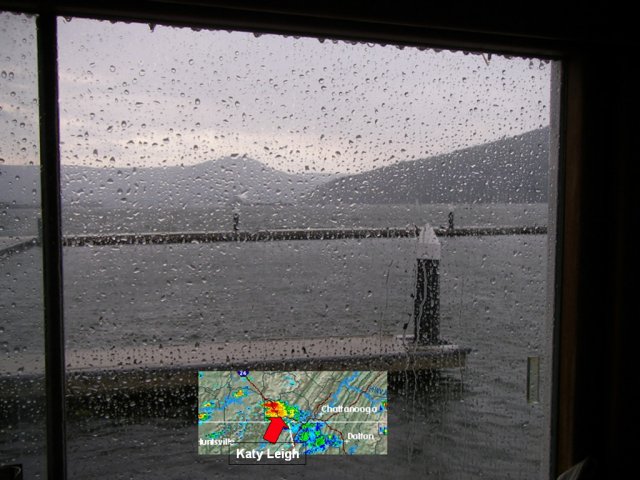 Last night we had a wonderful dinner at Bob and Gail's house which is right beside the Gold Point Yacht Harbor. Gold Point is a very well designed and built facility in a park like setting. It is mainly occupied by Carver and SeaRay cruisers sold by Erwin Marine Sales. They also own the huge Chickamauga Marina on the other side of the lake.  During the afternoon I decided it was time to start the generator for the first time this trip, but the generator battery was shot. Bob took us over to Erwin Marine (his company) and I was able to get a new battery. After dinner I installed the battery and the generator started right up. Next, I found I had lost the boat key. We used the spare to get aboard and this morning Bob called to say someone at the marina had found it on the ground. After all the hastle I put Bob through I doubt I will ever be invited again. After dinner we watched a DVD of the Lake Tahoe Antique and Classic Boat Society Event. It was very well done with a combination of video, stills, and great music. We made history this morning when the lockmaster said we would be delayed 30 minutes and then it only took 15 minutes. The norm is a 30 minute delay extending to an hour. He said the lock was in a "stall" with some maintenance being done. Sure enough the lower end door closing mechanism was being worked on by 3 or 4 men when we got inside. We cruised through the Grand Canyon in great time with a 1.5 mph current behind us and arrived at Hales Bar Marina at 11:30 CDT. It is now raining and very windy but the NOAA radar shows it will soon be over (see photo) Tomorrow we will go to Goose Pond Marina, Friday Huntsville, and Saturday Wheeler State Park for the AGLCA Rendezvous.