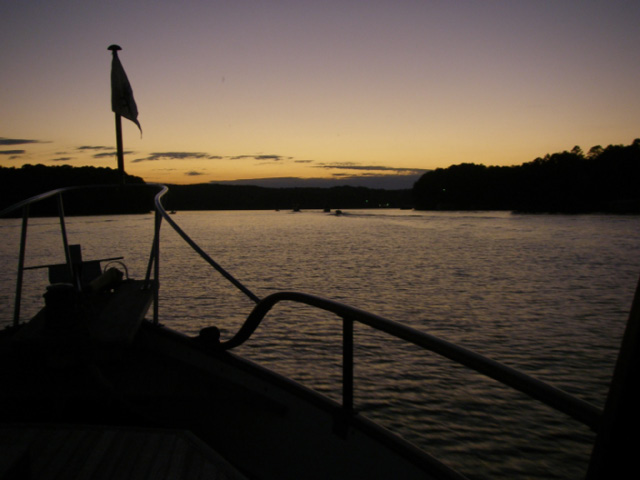 We left at 7:15am with 5 other boats for the lock at Wheeler and then the Wilson Lock. Wilson was badly damaged a few months ago and is being rebuilt. As a result only the auxiliary lock is being used. It can only accomodate one barge at a time and has a double lift so it can take a whole day to get a single tow through. We were through Wheeler by 8:00am and then had a 2 hour cruise to Wilson. One of the boats called at 9:00am and was told it would be noon before we could start down. It was 12:45 before we entered the lock. By then we had 7 boats. There were only 3 bollards that worked so we had to raft up to 3 boats deep in the lock with 4 across beside us. Finally at 1:41 we were out. We wanted to get to Aqua Yacht Harbor to pick up our propeller we had left to be fixed on the way up. The GPS said we would get there at 6:45. Sunset was at 6:12 so we would be arriving in the dark. We made it as planned (see photo) along with several other boats that were heading for their slips. Aqua arranged for some live-aboards to help us in and take on 210 gallons of diesel. The first diesel since Lenoir City. Tomorrow we head for Clifton through the last lock of the trip at Pickwick Dam.