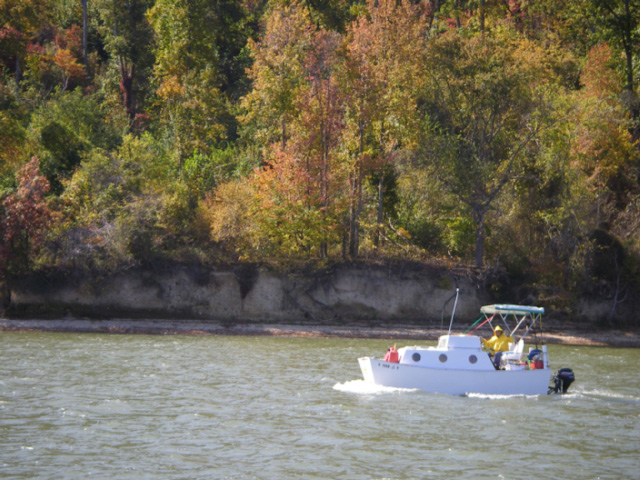 It was cold overnight. The docks had ice on them this morning with a dock temperature of 29 even though the water a few inches below was 58. Mavis had fun sliding down the ramp after a trip up to see if there was fog on the river. There was a little fog but nothing to hold us back and we were underway at 7:45 arriving at Pebble Isle at 2:30pm. We sighted a large flock of Snow Geese at the Tennessee National Wildlife Refuge just north of I-40. This was the busiest day for boats on the river we have seen so far. A lot of boats heading south including the one in the photo. It is from Illinois and is named "Crew's Boat". We also passed about 4 tows which was unusual. At the marina we walked 1/2 mile over to the Johnsville State Historic Area. This was the scene of a major battle in the civil war where for the first time ever the Confederate calvary under Nathan Bedford Forrest  beat the Union Navy and sank several gun boats.  It seems that under a previous state governor the park was to be closed to save money and all the relics in the museum were moved to Nashville. The new governor said no to the plan to close but now they can't find where the relics were stored. The museum is open only by appointment but we peeked in the windows and it was empty except for a cannon and a few pictures on the wall. This is our last night aboard and we celebrated with dinner at the marina restaurant. Tomorrow we have 54 miles downstream to Kenlake.