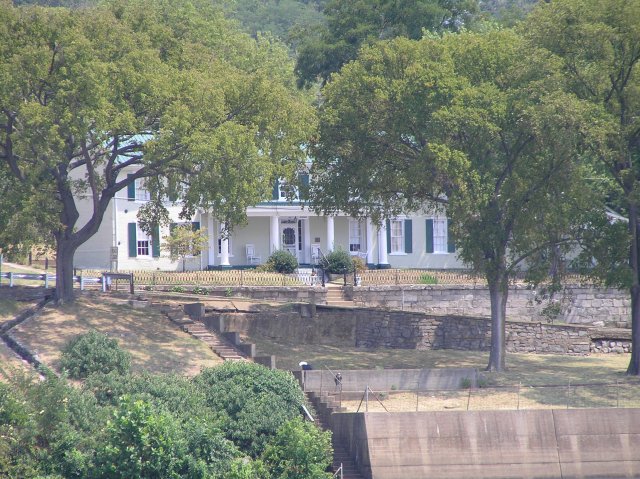 It was a hot day with temperatures way up in the 90s. We left at 9:00AM with Casting Away, a 42 ft Hatteras, to cruise 48 miles to Barkley Lake State Park Marina. Our ETA was 2:15pm and that's about when we arrived. Passing through the Barkley Canal at the north end of Kentucky Lake we came to the Cumberland River at about mile 33. The Kentucky State Prison is one the most spectacular sights along this part of the river. It houses the most dangerous prisoners in the state and was built in the 1800's. The photo shows one of the homes built for the staff, but I believe it is now a museum. Around noon, the VHF radio blared with a "Pan Pan Pan" and the Coast Guard announced that there was a fire on the railroad bridge that crosses the Ohio River at Metropolis and that the river had been closed. I will listen to the broadcasts tomorrow to hear the latest news. Tonight we will attend a Grand Lakes Yacht Club party at the convention center here. Tomorrow it is a 68 mile cruise to Clarksville. Verizon phone service is very poor here but there is free wi-fi. You have to get a code from the marina office.