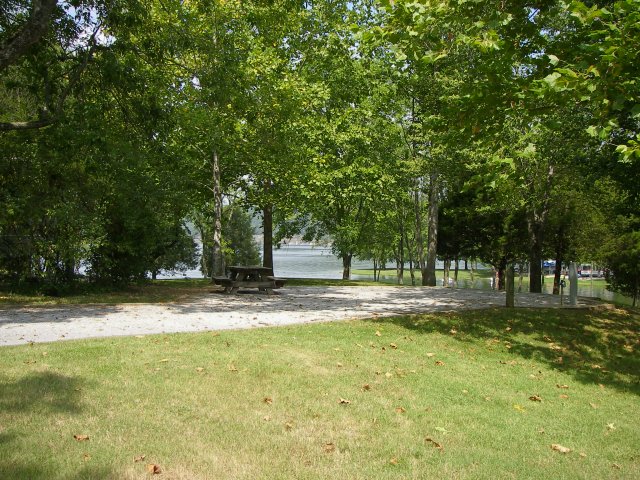 We took a rest day and stayed at the dock all day. Allan took us over to see the houseboat that Elvis is planning to take to Birmingham by water. It will be lucky if it makes it to the first lock. It is in pretty sorry shape and hardly built to go 900 miles. The anchor is a concrete cylinder with a line on it. Most of the boats on the dock along the river are wrecks. People are paying far more than the boats are worth to store them here. They are never visited. One homemade houseboat was used to get a bank loan. The application said it was a 2001 Homemade. The bank thought it was almost new and that Homemade was a brandname. The owner went bankrupt and the bank took it over. A man from Chicago was at the bank and looking for property. They mentioned the Homemade and he bought it for $2200 or so, sight unseen. In the morning we walked over to the Corps of Engineers campground and looked around. It is a first class location and a place we would like to revisit on the motorhome. There are many beautiful sites right on the water with power and water (see photo). At this time of year it was perhaps 30% occupied. Walking back to the marina large boat dock we spent a couple of hours on the shared party barge talking boats with several of the owners. John and Carol on Morning Mist II, a large 50 ft cruiser have cruised 2/3 of the loop. They are the only members of the Grand Lakes Yacht Club from Defeated Creek. We had a late lunch at the Creekview Restaurant and watched a movie on the boat.