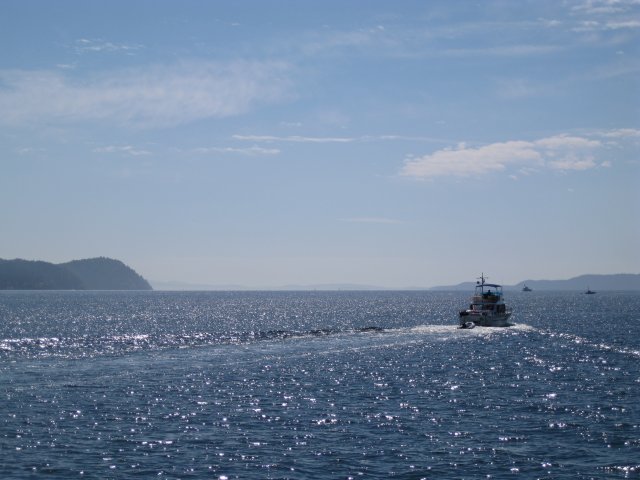 At 8:00am David & I took the dinghy over to an old tug boat at anchor which is used as a bakery. They had some delicious cinnamon buns. We bought 4 and took them back to Orca for breakfast.

Orca is a 16 year old Grand Banks that is probably the best maintained in the world. It looks like it just came out of a showroom. The teak, gel coat and interior are in immaculate condition. David said that when they kept it in Seattle they had a boat detailer work on it every year. The original owner had installed all kinds of gadgets the most remarkable being a scanning sonar. When you turn it on the transducer is lowered into the water about a foot under the hull and then rotates like a radar scanner. The 15” screen provides a radar like image with red showing solid objects such as other boats or rocks.

We left about 10 and cruised 50 miles around Saltspring Island and back to Ladysmith Yacht Club. The scenery is magnificent with high mountains and sparkling water. At times we could see Mt Baker and the Olympic Mountains in the USA. Dinner tonight was at the Crow & Gate a really good English pub that is just 2 miles from the house.