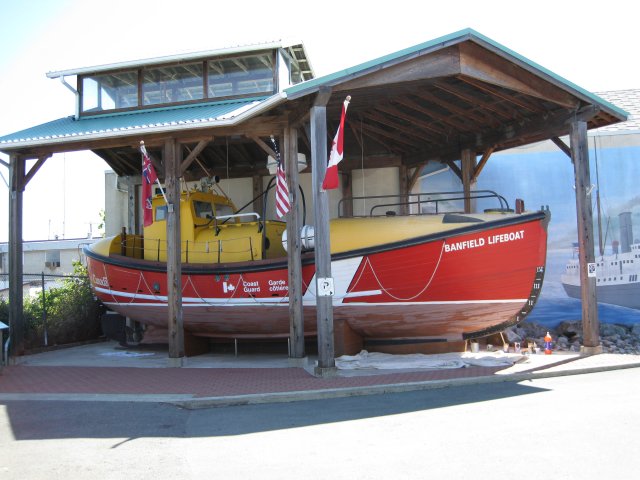 We left early for the return trip across Vancouver Island. Early Sunday morning the traffic was light and we got to Port Alberni without incident. I had breakfast there at little restaurant on the docks.

There is a long inlet from the Pacific that goes some 60 miles or so to Port Alberni. The port is actually much closer to the east coast of the island than the west coast.

The photo shows the restored Coast Guard Banfield Lifeboat that operated on the west coast of the island and was used to rescue sailors from ships that floundered on the rocky coast in the many storms that occur there.

Banfield is a small town at the mouth of the inlet.  We shopped in Nanaimo and headed south east 30 miles to Duncan to visit boating friends from Brockville, Doug and Ann.  Doug cooked ribs and corn on the cob on his professional BBQ. I never realized a BBQ could be so complicated with apple tree smoking wood chips, sear burners, and other accessories.

Tomorrow we head for Saltspring Island.