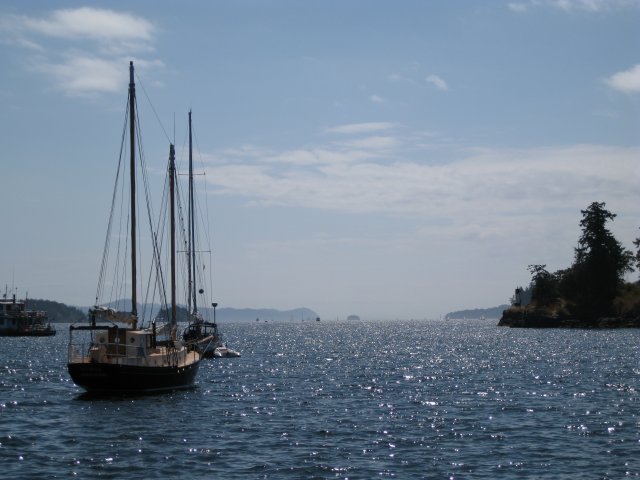 This was a very relaxing day with breakfast overlooking the ocean from the deck. We watched one cruiser narrowly miss running aground on a shoal. The shoals are all on the chart but not marked.

Bob and I then spent several hours comparing the differences between his Pleasureway motorhome and my Winnebago View. I envied the plaques on the side of his cab that say Engine by Mercedes.

Then we drove to Ganges to the Farmer’s Market which is held every Tuesday. It was the best market we have ever seen with a great variety of organic foods all grown on the island. We bought bread, wraps and pastries for lunch and vegetables for dinner.

A walk to the Ganges harbor yielded today’s photo. A nearby fresh fish market (with signs “"Just say no to farmed salmon") supplied the halibut and spring salmon for dinner. Then we toured a friend’s garden. He is the leading expert on growing bamboo.

A visit to Judy and Bob'’s son Mark'’s new house completed the afternoon. The bought a house from a former iron worker who had moved to an assisted living center. It came with everything the man had collected over many years.  A large shed was chock full of all kinds of tools and lumber. The house is being gutted and rebuilt inside. Not an easy task on an island off an island. There are many strange regulations on building which make it even more difficult. The philosophy here is that generally it is better to ask for forgiveness than permission. We had dinner overlooking the sound.

Tomorrow we take the 9:50 AM ferry to Victoria.