Stories
‹‹ Day 39 Sidney BC to Anacortes, WA
Day 37 Saltspring Island to Victoria BC ›› 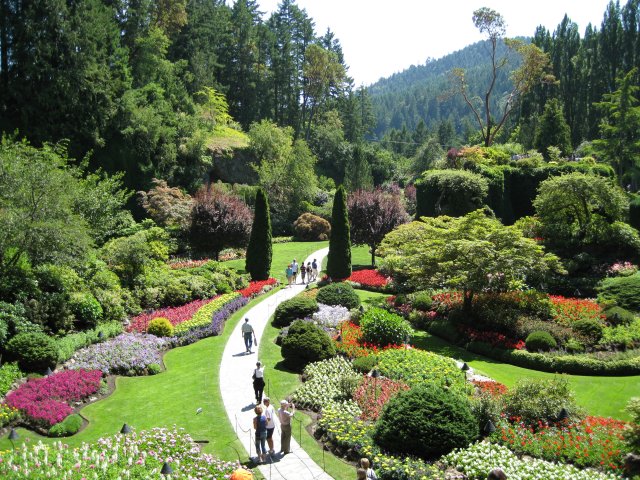 We drove the View and relied on the Garmin GPS to find our way to the Butchart Gardens. It was a mistake. It took us on the shortest route which is over narrow mountain roads past Prospect Lake.

It took close to an hour compared to the slightly longer route on a 4 lane road. It was a bright sunny day and the gardens were beautiful. There is almost too much color at this time of year. Mavis said it was like the grand finale of a fireworks show when they fire everything at once.

They have a new Duffy electric tour boat. When I showed up for the tour there was no one else and I received a private tour of the waters of Brentwood Bay and Tod Inlet. It is a beautiful area for cruising and anchoring. We stayed for the afternoon tea which was a meal in itself.

This evening I walked some of the West Bay Walkway. It is the finest walkway I have ever seen and runs along the coast 2.7 miles from our RV Park to downtown Victoria. At times the boardwalk is suspended from the cliffs. I watched a cruise ship come in and many sea plane landings as I walked along. It seems the cruise ships coming out of Seattle have to stop here to clear Canadian customs before heading up the Georgia Strait for Alaska. The ships that leave from Vancouver don’t have this penalty.