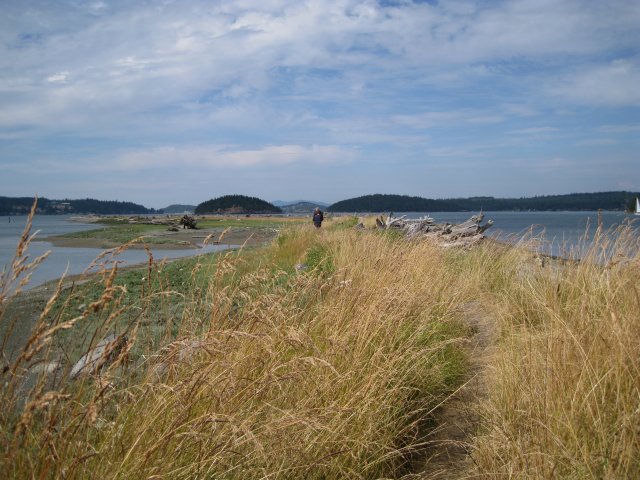 The ferry trip back to the USA was very smooth. US Immigration is in Canada but Customs are in the USA. Mavis gathered all the fruit and vegetables and let the inspector who came aboard decide what had to go. After the formalities he became very interested in the View.

It was then an 18 miles drive south on Whidbey Island to my cousin Alan’'s house overlooking the passage between the Island and the mainland. The Ala Spit (see photo) is just down the hill in front of his house.

Many pleasure boats from Seattle were cruising north and through Deception Pass for the weekend. The current is tremendous and the waves in the pass are very dangerous. Alan’'s son Thomas flipped his kayak near the pass 3 days ago. Alan was nearby on his kayak.  They put the two kayaks together and Thomas was able to climb back aboard.

We had dinner at the Deception Inn, a very good but very small family restaurant. Tomorrow we head 150 miles east to Levenworth WA and then on to Spokane the next day.