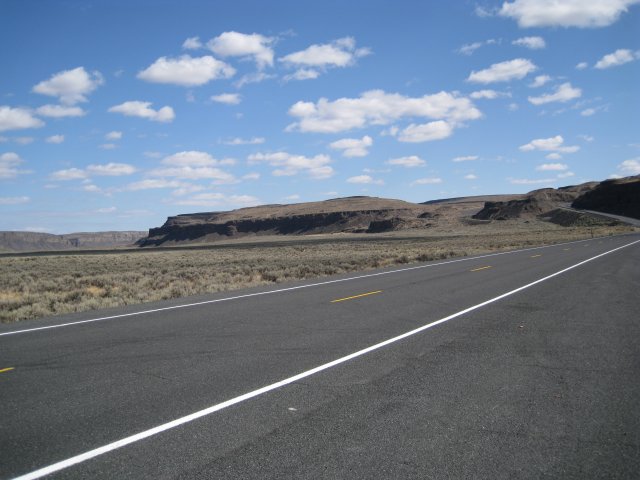 Osburn is a tiny village of mostly mobile homes in the mountains of Northern Idaho. The Osburns work in the world’s largest silver mine. Mining clothes are not allowed in the RV Park washing machines.

To get here we drove about 250 miles through some of the most interesting country so far; we saw everything from apple orchards, to vast plains of wheat, to desert and mountain lakes.

Several people had told us to take US #2 and we were glad we did. The photo shows a 2 mile long canyon in the desert that was completely wild. We were alone and with the engine stopped the silence was deafening. Route #2 is a great motorcycle road and there were quite a few out. As we were leaving Leavenworth, a neighbor came over to see the View. She said if I was interested in geology to watch out for some large boulders in the fields near the road. They got there during the ice age when an ice dam built up to 700 ft high and then broke causing a massive flood. Sure enough we passed by a few of these rocks and got a photograph. There were also a lot of smaller stones that the wheat farmers had put into piles.