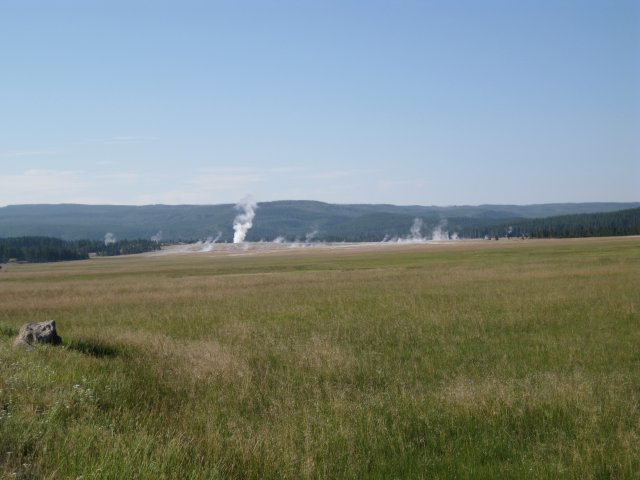 Tonight we are in Greybull Wyoming at a KOA in the heart of the Big Horn Basin. The temperature went from 41 to 105. We are in the desert so hopefully it will cool off tonight. The altitude at 3,788 ft is down 3,000 ft from West Yellowstone.

Last night we had dinner at the Oregon Shortline Restaurant. Of interest was the restored 1903 private railway coach housed inside at the front door. It was used by the VP Marketing of the railway. The coach was open for tours and beautifully restored.

This morning when we got to the park entrance we found the route I was going to take through Yellowstone was blocked due to a forest fire. The alternate was a little longer and the same route the bus tour took. However, we were able to stop at different places than on the bus tour.  There was no wind so the fumaroles were easy to see. (see photo).

Heading east from the park there were more forest fires which blocked the views with smoke. Our next stop was at the Buffalo Bill Dam on the Shoshone River. At 350 ft high when built in 1910 it was the world’s tallest. At Cody we toured the Buffalo Bill Historic Center. A good friend of ours is a descendant of Buffalo Bill so we were interested to learn more about him. There are 5 museums in one building devoted to life in the west. It’s well worth a visit.

Tonight we had dinner at Dutchie’s Restaurant which is in the KOA RV Park. It was one of the best meals yet on the trip. It is small with maybe 10 tables and all were filled. We sat with a couple from Abbotsford BC. Definitely not what one would expect at a KOA park.