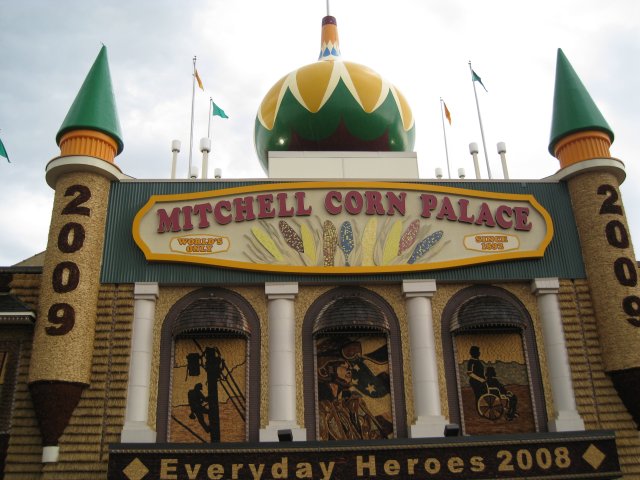 We awoke to pouring rain, but before leaving Mitchell had to go and see the 1892 Corn Palace (see photo). Apparently it is visited by 500,000 people per year.

The images, such as the lineman, are replaced annually with much ceremony. The colors in the panels are from different types of corn. The corn is cut to length and sliced along the axis. The half round pieces are then glued to the panels using a paint-by-numbers system. The palace is a sports arena.

At 9:00 we were on I-90 headed east. In spite of the rain motorcycles were still heading for Sturgis at a rate of 1 every 19 seconds.

The GPS took us the shortest route to Brainerd over many short segments of different roads and through rural Western Minnesota. We are now with (former Nortel) friends, Gary and Susan, who live in a beautiful log home on the Gull River. The area is a major resort district in the state with 100’s of lakes and rivers as well as the headwaters of the Mississippi River. We will spend tomorrow here and then head for St. Paul on Friday to visit our grandchildren.