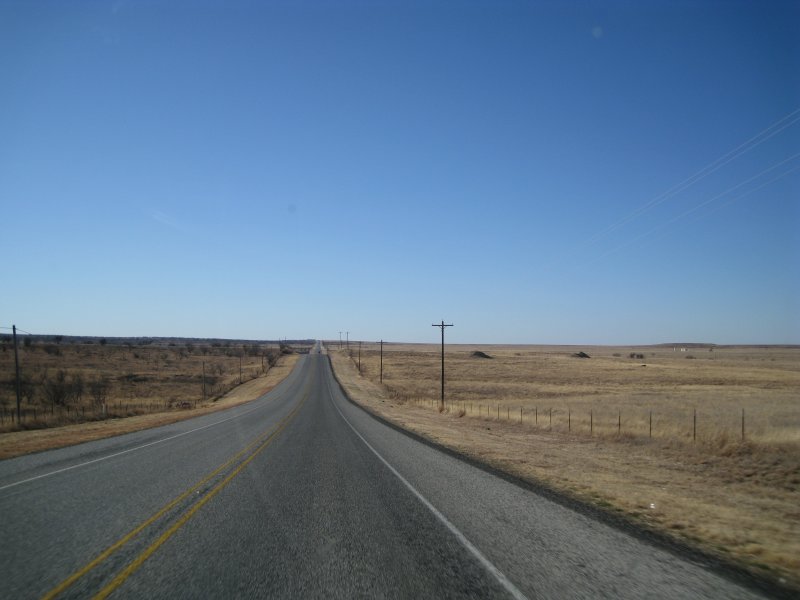 Out at 7:55AM, after an hour we left the Interstates for an old US highway #380 that takes you north of Dallas and Ft Worth to Roswell New Mexico. Haskell is half way to Roswell and has a public park campsite with power and water that is free the first night. We stopped in Denton TX to visit a Radio Shack in the hope I could buy a 12 volt power cord for the D-link mobile router that lets the iPod Touch, and two computers share one connection to the Internet via WiFi. The first cord I tried didn’t work at all. The second one worked but when I plugged it in to the Dlink, the Dlink would not light up. I checked the fuse in the power cord and found it had smoked. When all else fails read the instructions. They showed I had connected the tip improperly. Now I worried that I had also blown up the Dlink.  The store gave me a fuse at no charge and the Dlink started up properly. I was greatly relieved. The new cord even has an on-off switch so I can turn off the Dlink easily and save the coach battery when necessary.   The photo shows the view ahead on US380 20 miles east of Haskell. I love the blue sky country. So far we are the only camper in the park at Haskell. We walked around the town square. There were some good looking stores but also many were empty. There were no local restaurants that we could find. So we came back to the View for dinner.  We returned to the sad news on TV that Nortel (my old employer) had declared bankruptcy today. It’s the end of an era.