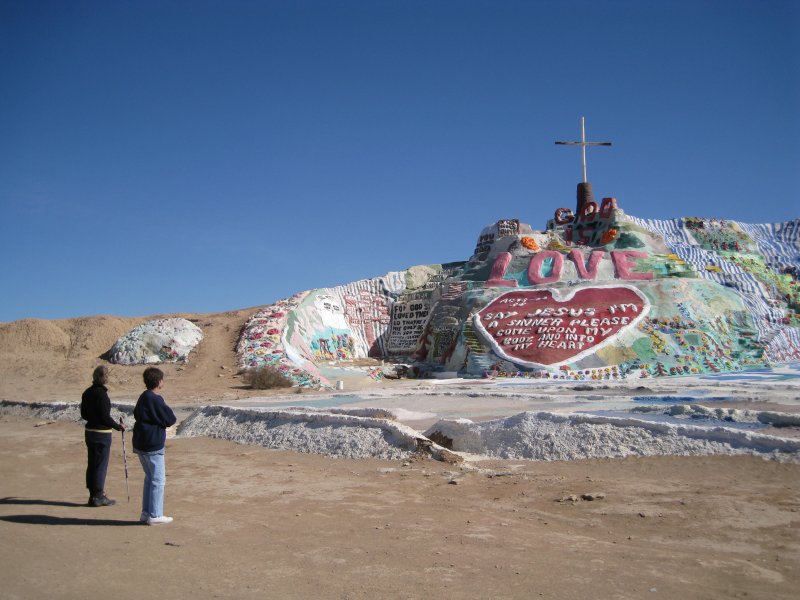 Slab City is the left over slabs from a World War II Marine Base. All the buildings were torn down leaving concrete slabs. Trailers and motorhomes then moved in on the slabs. However, Slab City is most famous for Leonard Knight’s Sanctuary Mountain. This is probably one of the largest examples of folk art in the world. Leonard found Jesus 22 years ago and began to build his mountain. Over 100,000 gallons of paint were used to create the painted waterfalls and yellow brick road. Leonard was there today and greeted us like long lost friends. He explained how columns were made from old tires covered with adobe clay. We then went a few miles to Bashford’s. Mavis did laundry while I worked with a local RV mechanic to try and get our hot water heater working again. It turned out there were two problems: bad connections and the hot water tank bypass was inadvertently operated a couple of days ago. Even if the water in the tank was hot, it could not be delivered to the taps. The mineral water comes from deep wells at 150 degrees. It is then cooled to 105 and put in a swimming pool and a series of 6 large bath tubs. I will head for the tubs tonight with Bob & Judith. Mavis is not fond of hot tubs.