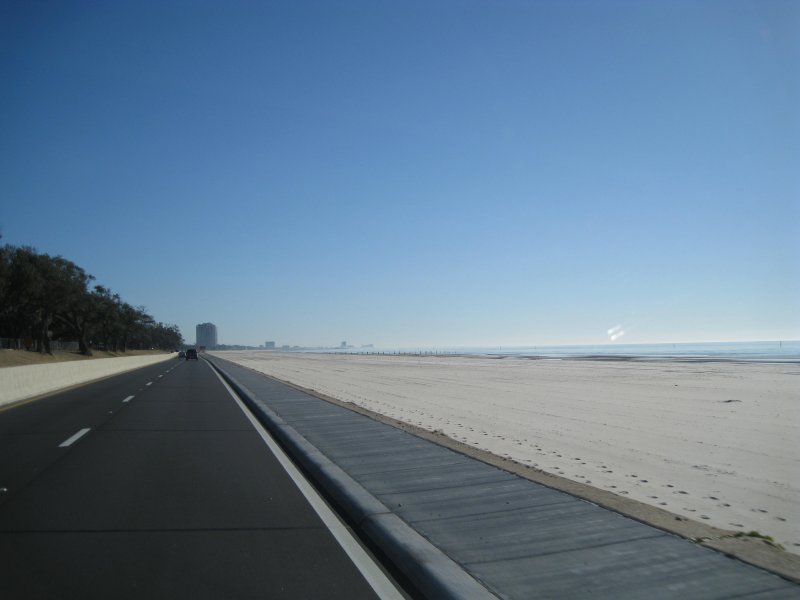 The Hollywood Casino buffet dinner was pretty good and there was a good variety of dishes. The gambling was not so good. They would only give $25 per account which meant $25. The first two cards wouldn’t work. The second card worked for a few times but then quit with $5 unused.  With total winnings of $3.50 on two tickets we cashed in and left for the View.  We took Hwy 90 east from Bay St Louis along the Gulf of Mexico waterfront in the area demolished in August 2005 by Hurricane Katrina. The recovery is amazing. A new 26 mile roadway has been built right beside the beach. The sidewalk in the photo is actually a seawall and goes down several feet into the sand. This must be one of the longest beach roads anywhere. The rest of the trip was not as interesting and we managed to get sidetracked twice. After paying the bridge toll to cross over to Pensacola Beach and driving 5 miles east we found the rest of the road was closed. We had to backtrack to Pensacola and take route 98 to Destin. The GPS couldn’t find the RV Park and again we wound up backtracking. The RV Park, Camping on the Gulf, delivered everything they promised and we are right on the sand 100 ft from the ocean with power and water. Tonight we had tenderloin and a Wal-mart King cake to celebrate.