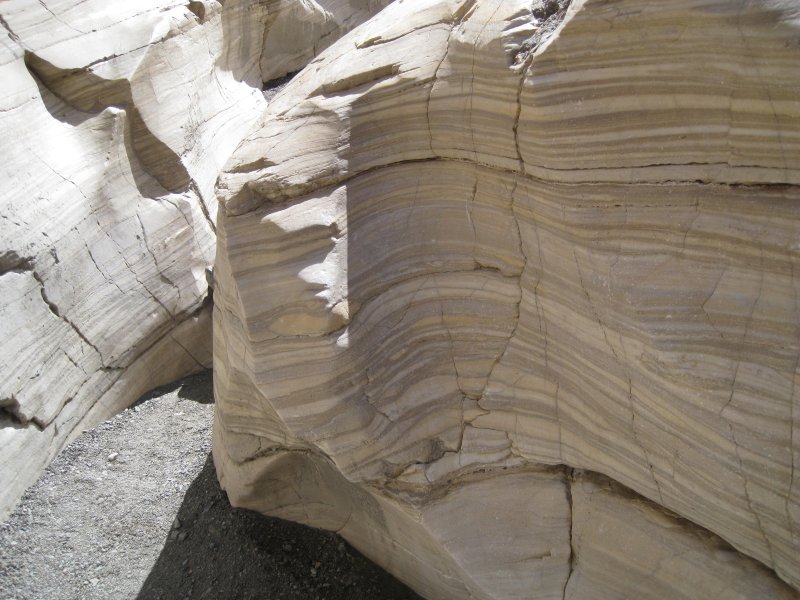 We splurged on breakfast today at the old Furnace Creek Inn. After all the money saved with our Golden Age Passport that gets you into the park free and discounts the campsite by 50% we could afford it. The Inn was opened in 1927 by the Pacific Borax Company which mined borax nearby. The adobe bricks that make up the mission-style architecture were created on site by Native Americans. Furnishings and decor in the lobby and bar draw upon the classic look of the 1930's. The Inn is only open from mid-October through mid-May. Breakfast was magnificent and the service first class. Then we headed for Mosaic Canyon. It was a 2 mile gravel road climb up the alluvial plain to a spectacular smooth marble narrow canyon (see today's photo). I have always thought Death Valley was a desert like the Sahara. There are a few areas of sand dunes but it is only a small percentage of the land area. We stopped at the Mesquite Flat Dunes and then drove  36 miles to Scotty's Castle. This is a 1920's Spanish style mansion built by Arthur and Bessie Johnson with Arthur's friend Scotty. Scotty was a performer having worked with Wild Bill Cody's touring show. He convinced Arthur there was gold in the hills and after seeing the area, Arthur decided to build a winter home. Frank Lloyd Wright prepared a set of plans for the home, but Arthur didn't like the look and fired FLW. As an aside, our tour guide mentioned that Bessie went to Cornell with FLW. The tour was very interesting and ended with an impressive organ concert in the music room. (see tomorrow's photo). We ended the day driving the Nevada route to Beatty. The sky was incredible with rainbows, rain showers, fluffy clouds, on a foundation of snow capped mountains and desert. We camped about 5 miles north of Beattie across the highway from Angel's Ladies, a Nevada brothel, with free all night truck parking. This was our last night with Judith and Robert as they are heading back to Vancouver Island in the morning.