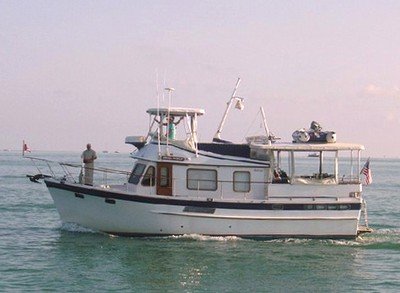 On this past Friday, Sept 30 there was a terrible boating accident on the Tennessee -Tombigee Waterway at mile 317. A 1979 43ft Defever, MOONSTRUCK, capsized and sank behind a tow. The 4 people aboard managed to get in their dinghy which was being towed behind.  The tow captain said he was drafting 11 feet and the water depth was just under 13 feet. He speculated that the tow had sucked the water from under the DeFever. The DeFever captain stated that the boat did not hit bottom but felt that it was pushed over. It rolled on is side in less than 10 seconds and sank in less than 5 minutes.  The above is from an AGLCA post by another cruiser that responded to a call from the tow. Mavis and I have been thinking about this accident and talking about it all day long today on our drive to Baltimore. The following is our pure speculation. I checked a map and confirmed there is a very sharp S turn at about mile 317. It is safe to assume was Defever going southbound and met a northbound tow. They probably passed on the "1" or port to port. The turn was probably a starboard turn for the tow and the Defever.  Both vessels were on the outside of the turn which is where the water is deepest,  with the Defever closest to the shore. On such a sharp turn the aft end of the tow would "slide" across the river narrowing the amount of water available to the Defever. As soon as the tow passed the Defever turned sharply to port to get away from the shore. I am guessing all 4 people were on the flybridge causing the center of gravity of the boat to be higher. On such a turn the Defever would lean over to starboard. At that instant the prop wash behind the tow would hit with a strong current building a relatively high wave. That pushed the Defever on its side.  The Defever could not recover and sank. There are lessons to be learned from this accident. Only use of  an AIS would have shown the name and position of the tow on the waterway. Radar is useless because of the sharp S turn.  If you know a tow is close but can't be seen always ask for passing instructions. If you know the name of the tow it is easy.  A tow captain might say to wait on the straight if there are sharp bends. It is better to wait for a tow to pass than get caught beside it on a turn.  Finally never attempt to cross close (less than 1/4 mile) behind a tow, the waves in its wake are much higher than you think. I speak from experience on this point.

Bob DeGroot sent me the following analysis and gave permission to post.

Interesting analysis. I do think the water depth along with the draft and speed of the tow made a big impact.

When I was on a 100 foot flat "tow" bottomed buoy tender (CGC Rambler) with a 6 foot draft in the right conditions we created a tsunami along with Seiche like water drop and rise. The right conditions were relatively shallow water in a narrow space. At 10 mph In 12 feet of water with sharply rising banks, our hull would literally pull water from the bank and drop it to an easy 5 + feet 75 + feet from shore before tapering off creating a Seiche like condition with the tsunami not looking nearly as tall because it was being created in a low water condition. That would go on from 50 feet to couple hundred feet behind us. When the water came back it washed well over the bank. We looked like an accelerating Sea Ray but with the wake further behind and much lower in the water.

Now all boats will do this, not just tows or Sea Rays. Try going fast in the Dismal Swamp. Not only do you pull water from the bank but you will also suck logs off the bottom. The suction is enormous. The boats behind have to slow way down or get clobbered with debris while they are now touching bottom in the lowered water. So the point is that the narrow area with relatively shallow water for the tow played a huge role.

So in the spirit of pure conjecture, suppose a one whistle situation did put him closer to shore than is comfortable, and suppose the tow was accelerating causing it to suck more water. Then suppose the DeFever was moving away from the bank after the tow passed but was also being pulled from the bank with the falling water. If the skipper wasn't exceptionally vigilant at that moment he would hardly notice the extra pull, maybe just an odd sensation of going faster (like heading down the Mississippi). There would also be a sinking sensation (no pun intended) because he was not only moving from the bank, but he was also being lowered in the water as it flowed out from under him.

Now if for any reason he was then turning to starboard or port putting him anything but square on the wake (going around the corner, turning into the tows wake, eddy current, etc.) and then got hit anywhere from slightly forward of beam to as far aft as a quartering sea, the tsunami of the returning water flow plus the rapidly rising water would indeed push him over with very little he could do to correct the situation. If he was heading into the visible stern wake, he could have been a victim of the less obvious Seiche style rapid water rise. Round bottom full displacement boat + tsunami + Seiche = perfect storm.

With corrective action the 44 DeFever underway will self-right with up to a 65 degree roll. The 44+5 can go over further but is less likely to because of the different bottom shape and keel. So this 43 had to be pretty much stopped (or in flow with the falling/rising water when it took the push and rise on the beam. This rise and fall of the water would be like pulling out into a fast moving current and not realizing just how fast it's taking you sideways until you're quickly approaching something that would cause and abrupt stop.

If you hear anything, let me know please. We own a DeFever 44+5 and are obviously interested in the outcome of any investigation Otherwise, it may just be a case of the tow company buying a DeFever if it can be shown that the tows wake was a factor.

In so far as being responsible for damage caused by his wake, size matters.

"10. What are the regulations concerning wake effects, wake damage, and responsibility? Regarding one's wake, vessels over 1600 Gross Tons are specifically required by Title 33 CFR 164.11 to set the vessel's speed with consideration forâ€¦the damage that might be caused by the vessel's wake. Further, there may be State or local laws which specifically address "wake" for the waters in question.

While vessels under 1600 GT are not specifically required to manage their speed in regards to wake, they are still required to operate in a prudent matter which does not endanger life, limb, or property (46 USC 2302). Nor do the Navigation Rules exonerate any vessel from the consequences of neglect (Rule 2), which, among other things, could be unsafe speeds (Rule 6), improper lookout (Rule 5), or completely ignoring your responsibilities as prescribed by the Navigation Rules.

As to whether or not a particular vessel is responsible for the damage it creates is a question of law and fact that is best left to the Courts. For more information, contact your local Marine Patrol or State Boating Law Administrator."

12. When do I need a Look-out? According to Rule 5, all vessels are responsible for maintaining a proper look-out at all times this includes one-man crews, unmanned crafts, and recreational boats.

The term look-out implies watching and listening so that he/she is aware of what is happening around the vessel. The emphasis is on performing the action, not on the person. Still, in all but the smallest vessels, the lookout is expected to be an individual who is not the helmsman and is usually located in the forward part of the boat, away from the distractions and noises of the bridge. While no specific location on a vessel is prescribed for the lookout, good navigation requires placement at the point best suited for the purpose of hearing and observing the approach of objects likely to be brought into collision with the vessel.

The size of the vessel and crew effect this answer, however, the emphasis in every legal decision points to the need for a proper, attentive look-out. While the use of radar to evaluate the situation is implied in the requirement to use all available means, that is still understood to be secondary to maintaining a look-out by sight and hearing.

Many tows now have a crew member riding the bow of the lead barge so they can "see" around the corners.

Also, state regulations make simple rules, like  "Handbok of Tennessee Boating Laws and Responsibilities" Although they are written for recreational vessels, they do not specifically exclude commercial vessels.

So in a winding seaway where visibility is limited and in my way of thinking prudence would suggest the need for eyes forward. Did the tow have a lookout posted on the bow of the lead barge? Did the tow contact the pleasure craft with passing instructions (it's a two way street on making contact or signaling danger)? There are many questions that are yet to be answered that could shed some light on what happened and how it can be prevented in the future.