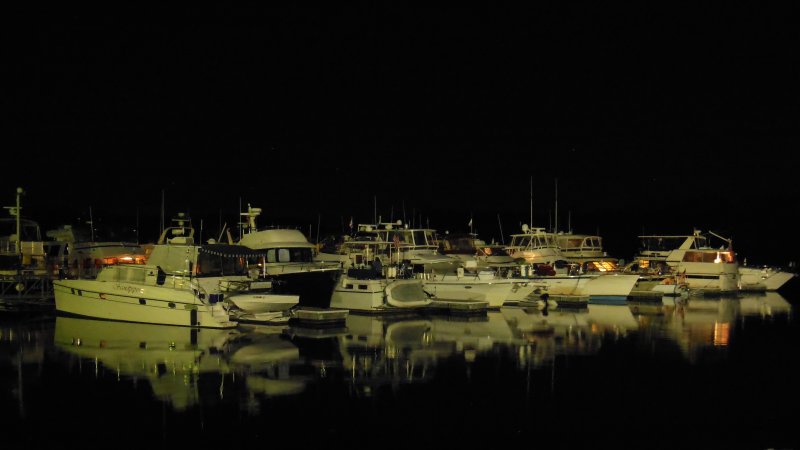 Night View of A Dock at Joe Wheeler State Park Marina LeeAnne and Hui joined us for a short but pleasant cruise to Joe Wheeler State Park. We had to shoe horn ourselves into a narrow slip beside a PDQ catamaran from Tobermory. We had lots of help and didn't hit anything. Bill and Joyce were a few slips away and were having a banjo and guitar concert with Joel and Debby from Water Music, a 40 ft Fathom trawler. I filmed them playing Crooked Creek and made a video for YouTube. Internet access was so slow I had to give up uploading. After 16 hours it had only loaded 65%. I'll try again when we get home. The events started on Sunday afternoon. It was great to see many people we knew and so many happy people. About 250 people attended. Every attendee introduced themselves and told interesting stories about their boating experiences. One guy kept getting lost and restarted the loop several times. He finally bought another boat and started all over again. I counted over 60 boats but they became difficult to count when the looper boats were mixed with resident boats. There were some really great seminars. The ones on buying and selling boats were given by broker Curtis Stokes. Steve Zimmerman, another broker, talked about structural issues that can found in buying a boat. Bottom line it's a lot more difficult to buy a boat than to sell one. The big horror stories are with fiberglass cored with balsa wood. If water gets in to the balsa it rots and is very expensive to fix. Tuesday we were bused to Rogersville where we shopped and attended a concert on the grounds of a B&B. The music was so loud, we moved farther and farther away until we wound up on the B&B's veranda and sat in a porch swing.  Our friend Jerry from Charleston came with us . Jerry's wife sat in row 2 because she liked her music loud. The band, KGB, played country music and rock and roll and were very good. Wednesday night was the final dinner. After dinner I was astonished to be given the Skipper Bob 2012 award for "Making It Better". I was recognized for the CDs, TrawlerFest talks, reprinting Fred Myers' books, and the new Chartbooks. The award is an embroidered signal flag that belonged to Skipper Bob before he passed away a few years ago. His tombstone is engraved with "HE MADE IT ALL BETTER". Bob's widow, Elaine, was there for the presentation and gave me a nice shirt with the Skipper Bob Award logo and my name on it. I'll have to wear it as a conversation starter at a Grand Lakes Yacht Club events.