We made it to Ilwaco this afternoon after 268 miles of a twisting up and down roadway. It doesn''t seem like much but we were only able to average 20 mph.  We spent the night of the 28th at the Cape Perpetua Campground in the Siuslaw National Forest.  It was dry camping. The new batteries worked really well. We watched a two hour movie and only used 6% of capacity according to the new battery monitor. 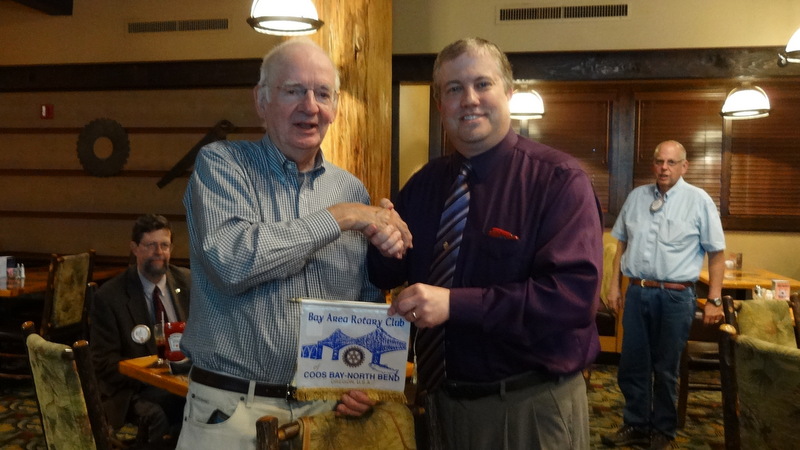 Yesterday I went to the Coos Bay Rotary Club lunch meeting at the Mill Casino. There were 10 in attendance including the two speakers and myself. I presented our club fllag and received one of theirs. The speakers spoke about their contra dancing and music program. They were trying to attract more participation. The Mill Casino is a redo of an abandoned saw mill of which there were many at one time in Coos Bay. The saw mill left a lot of hazardous waste, but since it was on an Indian Reservation the EPA rules were not very strict. 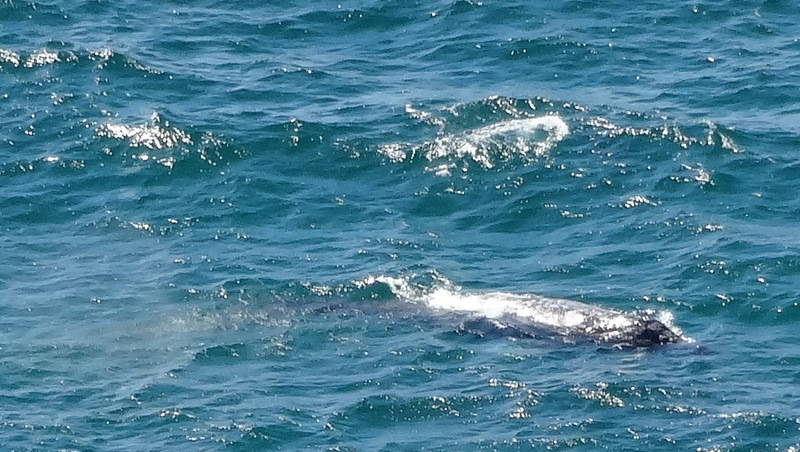 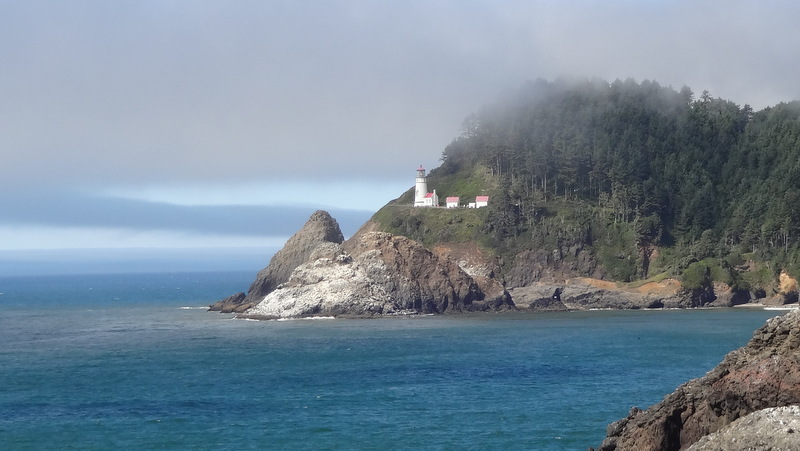 The coast is beautiful here with lots of capes and rock formations in the ocean.  We stopped at Sea Lion Caves, America's largest sea cave, and were informed that there were no sea lions at this time of year, however, there were at least 3 whales that could be seen below the cliff, and they took $1 off the $12 fee.  We watched the whales for a while and caught two in this photo. I shall always remember this place as where I dropped my wallet on a rock and didn't discover it missing for several minutes. We walked back up the trail and there it was intact. The photo taken from the path to the cave shows the 1894 Heceta Head lighthouse. It is claimed to be the most photographed lighthouse in the WORLD! 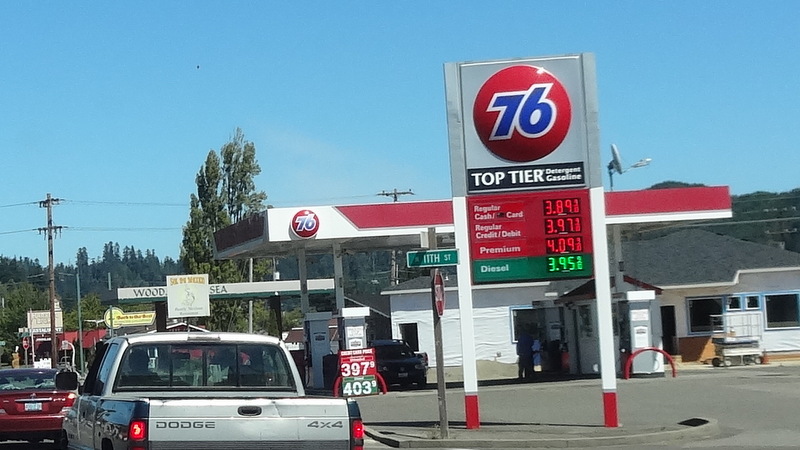 For the first time in 7 years of buying diesel we found stations where diesel was less than gas. At this 76 Station diesel was only 6 cents more than regular gas. 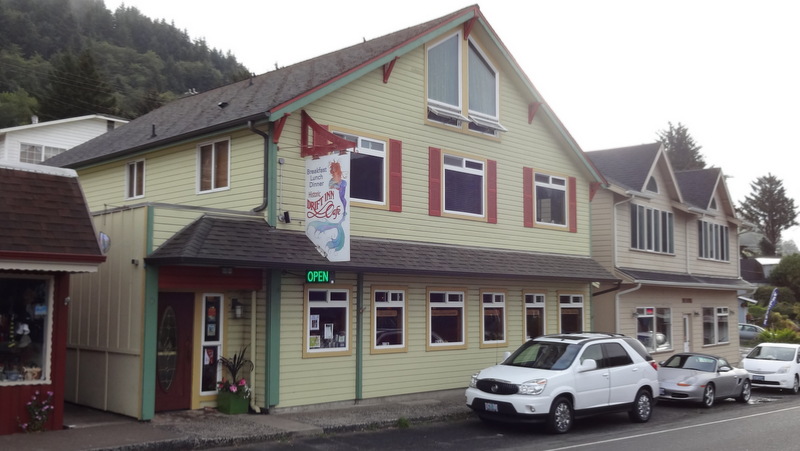 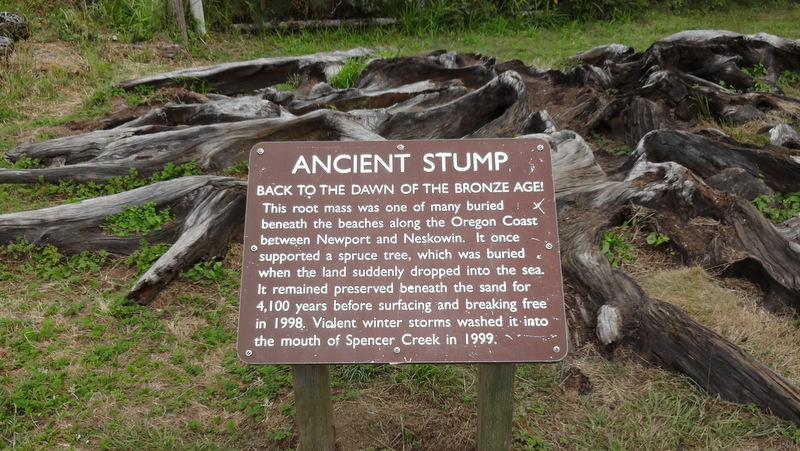 We were up early and stopped in Yachats for breakfast at the Historic Drift In CafÃ©. There was a long story to read about the history of the cafÃ© but what I remember was how a longtime owner finally had to give up when he couldn't remember who had paid after suffering mini strokes. Breakfast was very good. We stopped at Beverly Beach to see a state park recommended by a Rotarian. The beach was large and foggy. All the campsites were on the east side of the highway in the woods. It would not have been any better than the National Forest campsite we stayed in the night before. The most interesting item was the 4,100 year old stump. (Enlarge photo to read about it). 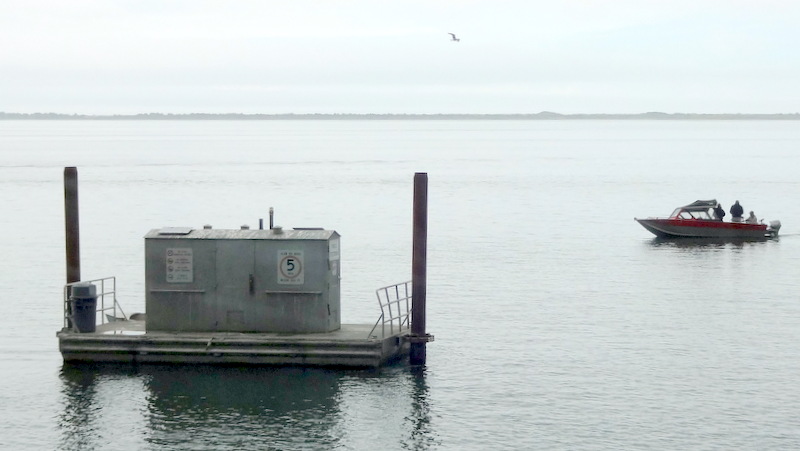 At Tillamook we stopped at a roadside view point and got this photo. Can you guess what is in that floating box?  Near Astoria we crossed the Columbia River into Washington on a 6.5 mile long causeway and bridge. We are now in Lewis & Clark country and will visit the museums tomorrow. Answer: it's a floating restroom for the fishermen. The guys in the boat just passed by it.