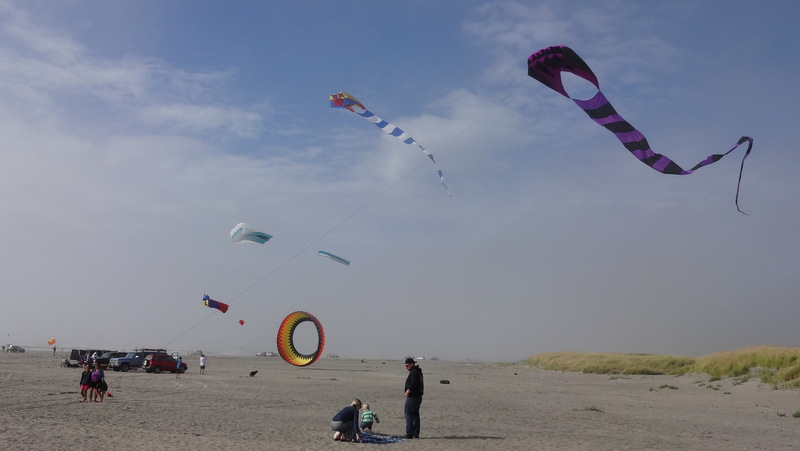 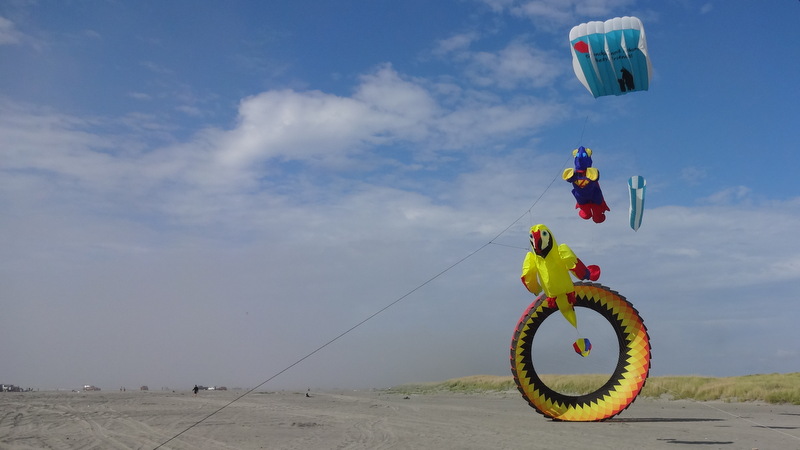 After publishing yesterday's post we went out on the beach and watched some spectacular kite flying. Here are a couple of photos of that scene. 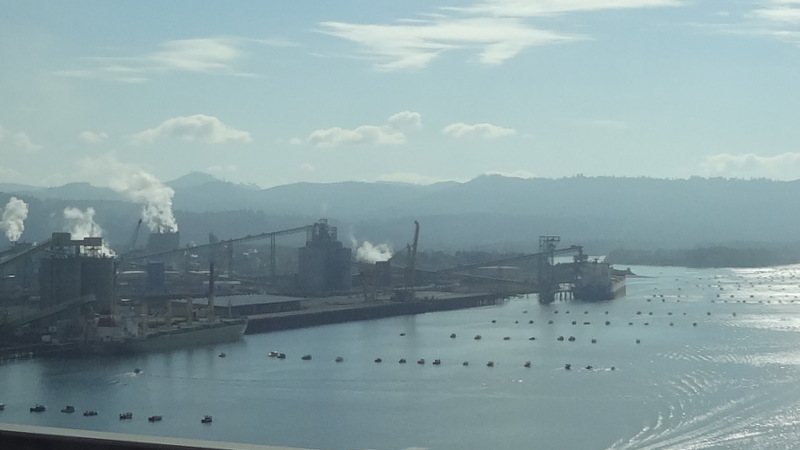 We are now on our way back east. We were away at 8:15AM and took the bridge across the Columbia to Astoria.  Two lane US-30 is a very good road and took us back over the Columbia to I-5 at Longview.  The current in the river is so strong that moorings are provided in rows on the river for salmon catching. The photo shows at least 10 rows.  We went around Portland until the Garmin GPS announced that I-84 was closed down. It then re-routed us on city streets that ran parallel to I-84 and then back to the Interstate at the next on-ramp.  We were really impressed and I am sure Garmin saved us hours if we had stayed on I-84.  The website news from a local TV station said a man waving a gun tried to carjack motorists on the highway. I-84 was shut down in both directions for four hours. 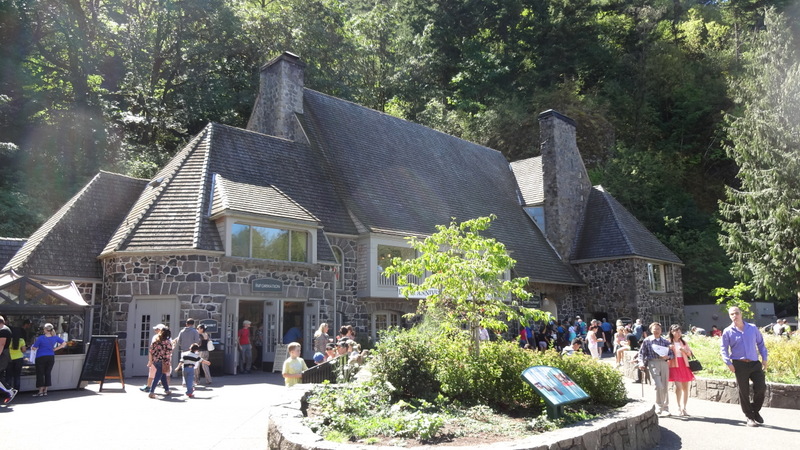 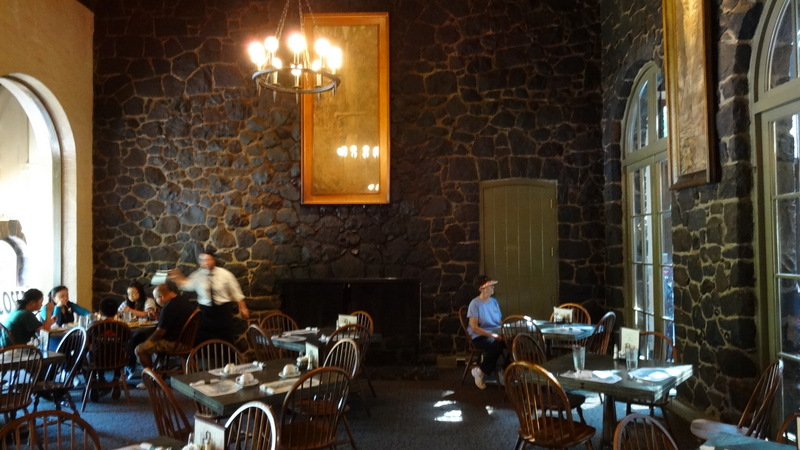 This is a spectacular area beside the Columbia River with high mountains on both sides and a roadway and railway track cut of the mountain sides.  The best known attraction is the Multnomah Falls.  I had read many descriptions in the RV magazines. Seeing the real thing was very rewarding. There were hundreds of people that also thought the same thing. However, very few took the opportunity to have a fine lunch in the Lodge at noon. Built in 1925 if is very handsome and like lodges in other National Parks. It never had more than 2 lodging rooms and those were used by railway workers. We had the special ham and cheese with salad. The property is owned by the Forest Service and operated by a private company. 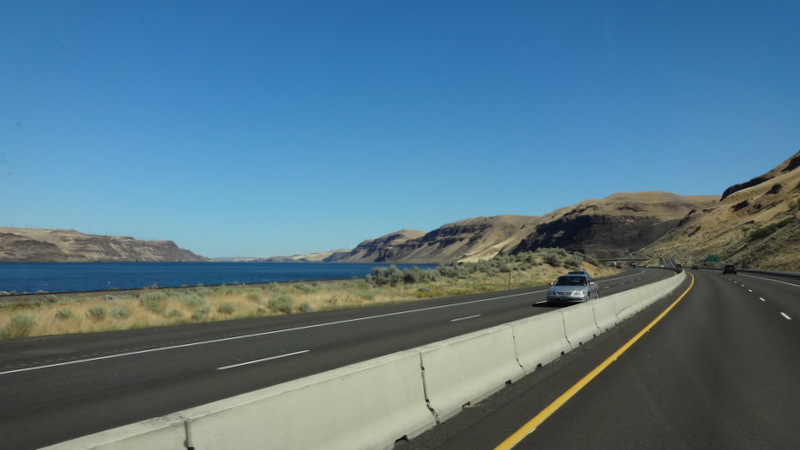 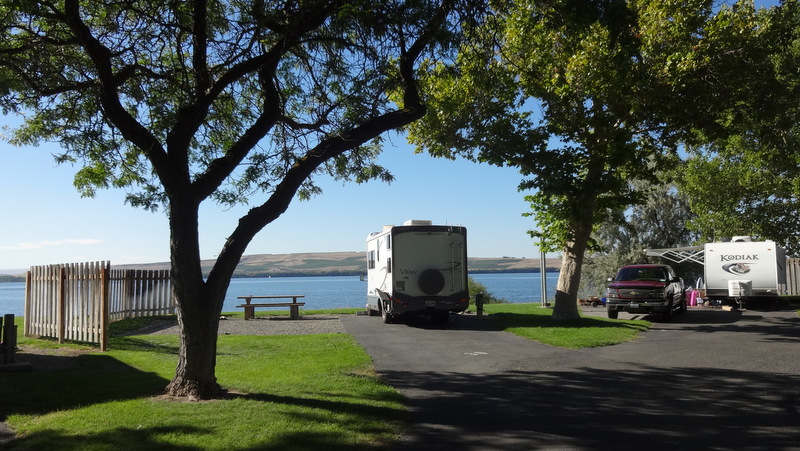 As you drive east the forests disappear replaced by desert and brown mountains. Then suddenly the mountains are gone and there are irrigated fields of crops. Tonight we are in the small town of Boardman (population 3,335) that owns one of the best RV parks yet; large sites, full hookups, beautiful grass and trees, large sites, a marina, and walking path beside the Columbia.

Here is a photo of the Multnomah Falls. Click to enlarge.