This morning at 9:30AM on I-90 at mile 297 the power train went crazy with some loud bumps on the chassis, no transmission and a dead engine.  We coasted to a stop on the shoulder of the Interstate.  I called Coach-Net our roadside assistance provider and after the operator took down all the details and a technician agreed we would need a tow, we waited. Then I went outside and looked under and found fluid dripping down I thought was diesel. I called them back to show the urgency of our situation and they said the fire department had to come out before they could authorize a tow. 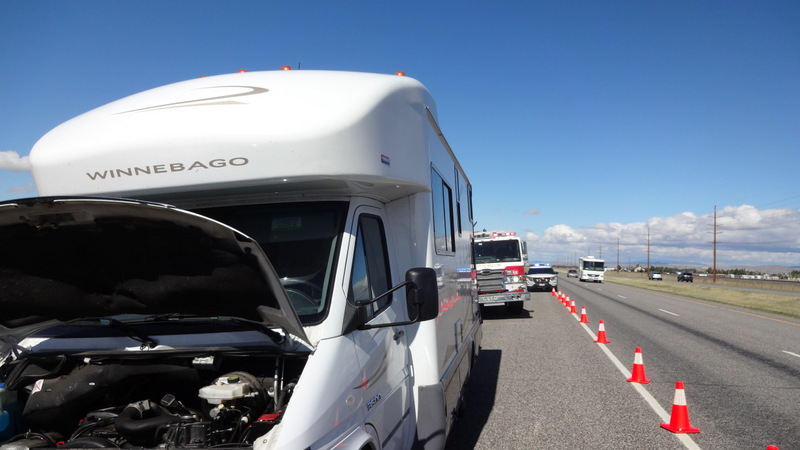 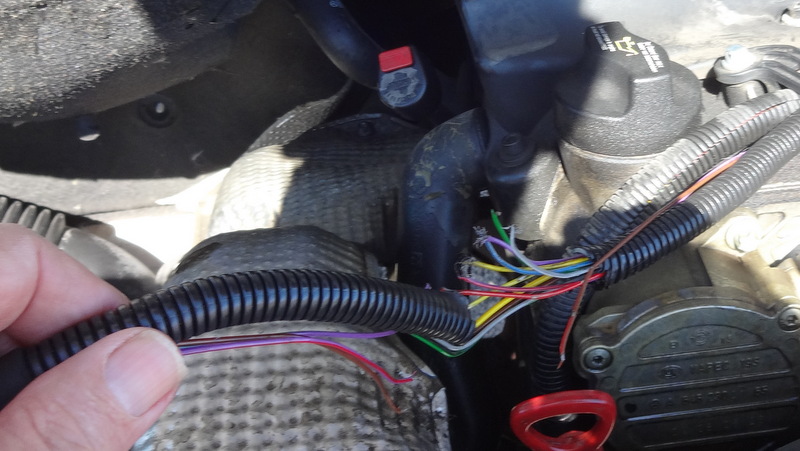 Since we were near Belgrade, Montana, the fire truck with a crew of 3 and a local sheriff's deputy showed up with some kitty litter. They put cones out effectively shut down one lane of the highway. They poked around under the engine and discovered the serpentine belt had broken and wrapped around the fan with pieces of belt that nearly severed a control cable with maybe 10 color coded wires in it. In addition there was oil driping down. They spread the kitty litter and went back to the firehouse. 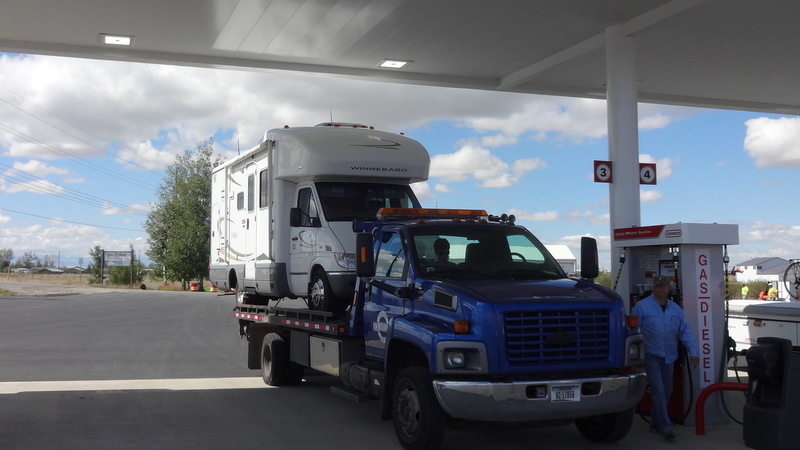 Another couple of calls to Coach-Net and they said the nearest place the View could be fixed was the Mercedes dealer in Billings, MT, some 152 miles away. E.J. Millers towing service from Boseman, 11 miles away would come and tow us.  The View was put on a flat bed and with Mavis and I in the front seat off we went at 12:30PM.  The picture shows how easily we could fit under bridges. We had lots of time to talk to Joe Miller. He grew up in the towing business and at one time had 7 employees and all kinds of truck. In around 2005 he decided to shut it down and bought a 34 ft motorhome he took to Alaska.  His wife wasn't interested in doing Alaska again so he went back in the towing business with just himself. We were lucky he was available because he was a real pro at towing safely.

We got to the Mercedes dealer at 3:30PM and the View was unloaded into the back lot without scraping the Mercedes.  A team of mechanics and parts experts came out and made a list of parts and said the oil was coming out of a hose that runs between the engine and the transmission.

We are now in the View, have power from a long extension cord, and where we planned to spend the night. We have water in the tank, lots of propane so we can survive a couple of days wait.  We have no idea yet how long we will be stuck here so plans for visiting in Brainerd and the Grand Marais Rally may have to change.  Its 971 miles from Billings to Grand Marais which would take a minimum of 2 days. We will know more in the morning.

Russ So glad nothing too disasterous happen with the diesel spilling.  Hope the repairs don't take too long or they are too expensive.  Hurry home we miss yo guys.

Sorr to see that you had a break down on the highway.  We had one a few years ago & thought we'd lost an engine.  Thankfully, it was only a pump and Cat covered under warranty.  Best of luck to you.

Billings seems to be the place to get vehicles fixed.

My wife and I limped into Billings during a trip from Detroit to Alaska in February.  We had blown a head gasket.  The car spent 5 days there.  We went to visit Yellowstone while waiting.

Good luck with your repairs.