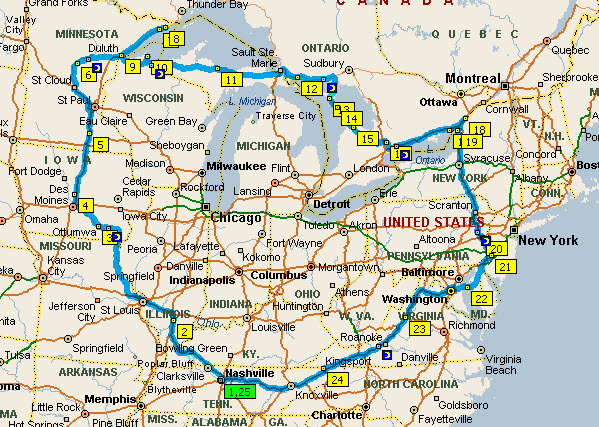 Returning to our shed in Murray one weekend we found a great puddle on the floor that looked like gray water. This meant a trip to Cullum & Maxey to get the problem fixed. Fortunately it was not a leak in the gray water tank but rather a split pipe in the gravity feed. As the water pump had been left on water was pumped out the leak over the rear wheel washing the dirt off the wheel on to the floor.  This made the puddle look like grey water. We left on schedule on Sept 9th headed for Grand Marais on the north shore of Lake Superior. The map shows our planned loop. 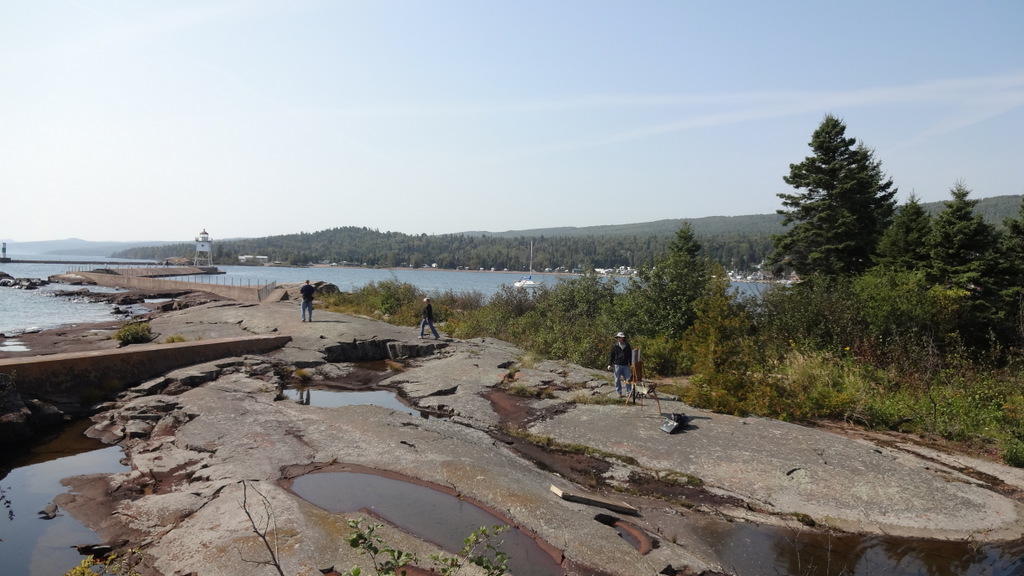 The weather at Grand Marais was perfect with warm days and cool nights. My talk on our trip to Big Bend National Park was well received with many in the audience teaching me the proper way to say the many place names. There were about 90 people at the event and the crowding problems were solved by having some of the table outside the meeting place. We caught up with our many RV friends and showed our Trend off to a large number of interested visitors on tour day.  They were happy to hear Mavis now speaks kindly of the Trend. The event was over Thursday morning but we had another night at the RV park. We used the opportunity to visit Naniboujou Lodge. Leaving the campsite in the pouring rain we left our flag pole up which caused a great commotion but no damage was done. We also left our leveling blocks in our site. A kindly neighbor picked them up and got them back to us when we returned.

This place was built in 1927 as a club and retreat for wealthy people from Minnesota and New York. Unfortunately the 1929 depression left a lot of wealthy people poor and membership tanked.  As a result the club failed and the many planned extras such as tennis courts and a lodge on the Canadian border were never built. The club is now in private hands and welcomes the public. The spectacular dining hall serves breakfast, lunch, tea, and dinner every day. We had the soup and sandwich for lunch which was excellent. That evening I went to an "Uplugged" West Virginia Public Radio concert in an enormous tent I watched being erected a couple of days before. The concert was a fund raiser for a school.

This has to be one of the all-time neatest towns we have visited in the past 8 years. There are art galleries, shops, and restaurants all over. Best of all it has a beautiful marina and marine museum. Bayfield is the gateway to the Apostle Islands and there are ferries that take you across to the major island.  We stayed at the City Campground that was highly touted by a friend at the rally but was pretty rustic. We were perched surrounded by trees in a tiny site 30 feet above the lake. I think my friend really meant Thompson's West End Park in Washburn which looked really inviting. Next time we will know better.

Tonight we are in the town park on the shore of Lake Superior with 110 sites, each with power. Surprisingly it is not listed on RVillage. Also surprisingly I could not find the address at 2145 Sugarloaf Ave. until I realized they use two words Sugar Loaf Ave. The Garmin GPS is not smart enough to figure that out but the shortened street address exists in another town 330 miles east. This will be the last post until Sept 28th as we will be in Canada and the cost to use the Internet very high.

In the past 18 months I sold only 3 copies of my "What to Expect Touring America's Great Southwest".  I did an interview with a friend as to how he planned trips. He told me he lists the friends he wants to see, the places he wants to visit, and then plans the route.  That gave me an idea to break the program into 27 "places" each with 3 to 15 minutes of video. Then I discovered Curious.com a website service that has 17,000 training courses. They were interested in starting some travel courses so our content fit right in. The entire Great Southwest is now available on Curious.com in the form of 5 Courses (one for each state) and 27 lessons.  Choose a course and then take the lessons for that course. I get paid for each course visited based on a percentage of the total courses visited in a month divided into 70% of their total revenue for the month. So far in two months course visits are growing rapidly and I have made more money than in the prior 18 months. Learners pay a monthly or annual fee and can take any number of courses during that period. You can now pay $8 and see all of my programs. The August revenue was up 299% over July. Who knows I make breakeven in another year or two. Are you feeling @curious. Click here to get 20% off.