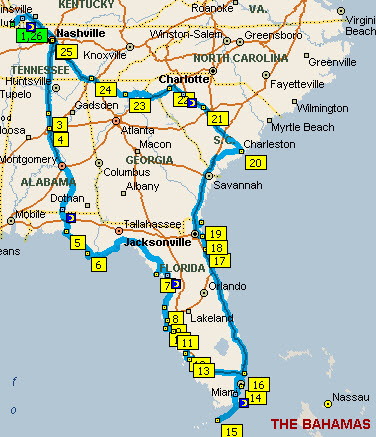 This is our third adventure in the new Trend motorhome. We drove our car up to the shed in Murray, KY on February 6th.  I checked the levels and discovered the propane tank was empty. It seems the full tank I left in the unit last fall had all leaked out. Somehow I had not closed the valve on the tank, however, with all equipment turned off there should not have been a leak. Just before we put the unit into storage there was a recall to replace defective cables connecting the propane tank to the regulator. The regulator takes the high pressure gas from the propane storage tank and delivers low pressure gas to the stove, fridge, furnace, and water heater.  No propane means none of these devices will work. Only the fridge will work when there is shore power. Monday morning I called Cullum and Maxey and they said they would fix the problem. It took them about an hour to replace the regulator. The tank was filled and we were ready to go. 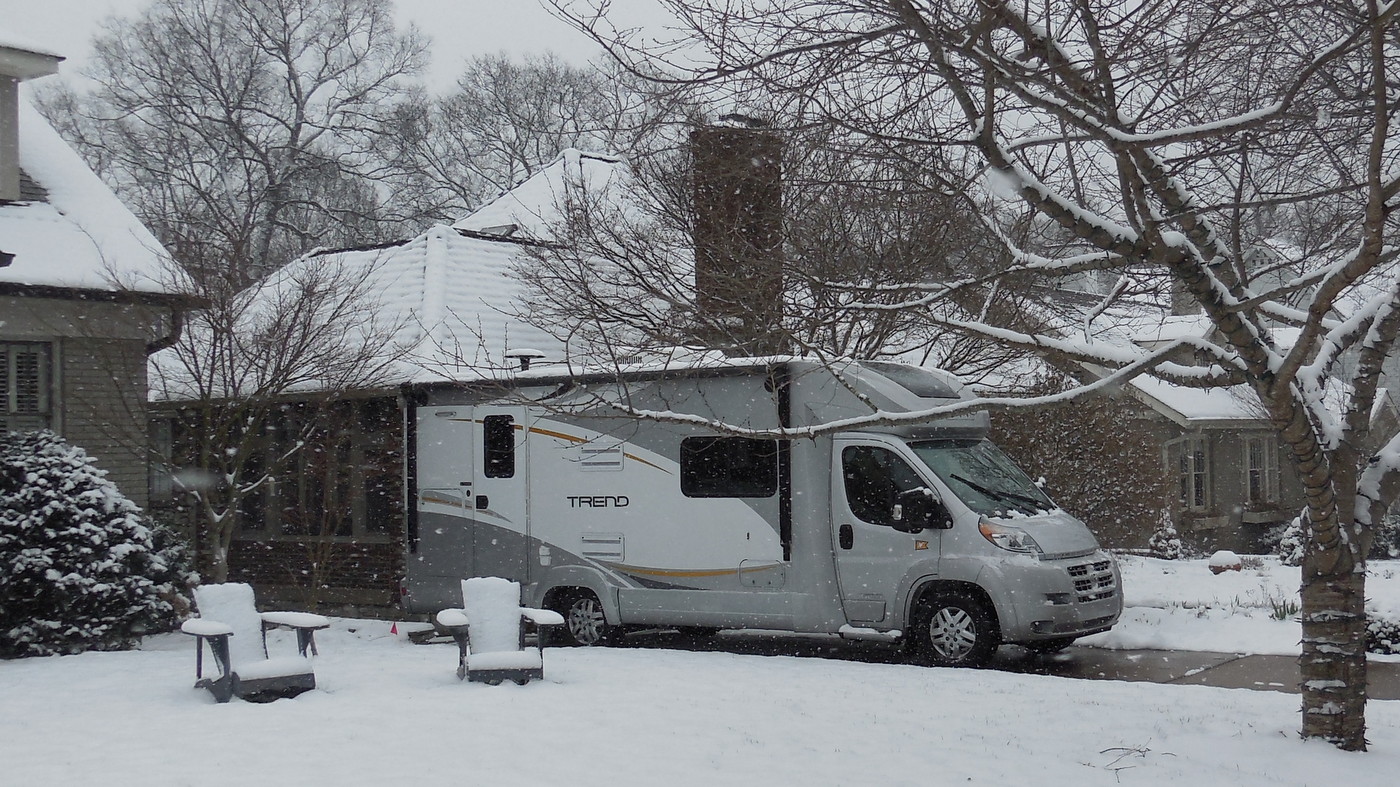 We left at 11:00 on Tuesday, Feb 9, and headed for Hanceville, AL. It was snowing (see photo) and the roads were covered with brine. The Trend became covered in salt and road dirt. I have never seen such a dirty RV. I checked the propane levels when we got to the Hanceville campground. The propane was down to half; another regulator failure. I called around and found the Camping World at Calera a few miles south of Birmingham had a replacement regulator, but would not be able to install it for 3 days. I decided to buy it and have someone at the Rally we were going help install it.  Wednesday we picked up the regulator and then I asked at the Service Desk if they could possibly install it. Mike, the service manager said he could have it done after lunch. We waited in our unit, had lunch, and explored the largest Camping World store I have ever seen. We found $50 in stuff we just had to have. The regulator was replaced by 2:00PM. The mechanic that did the job came out and told me all the things he had done. There are a lot of government regulations that govern anyone that works on propane systems. For example you need a manometer to set the pressure properly. I am glad I didn't attempt it. We refilled the propane tank and headed for Live Oak Landing (LOL) near Freeport FL arriving safely in the dark around 8:00PM.  I learned that it is a good idea to practice before driving a new rig in the dark. How do you turn on the high beams and turn them off? How do you dim the screens on the radio and the dash? 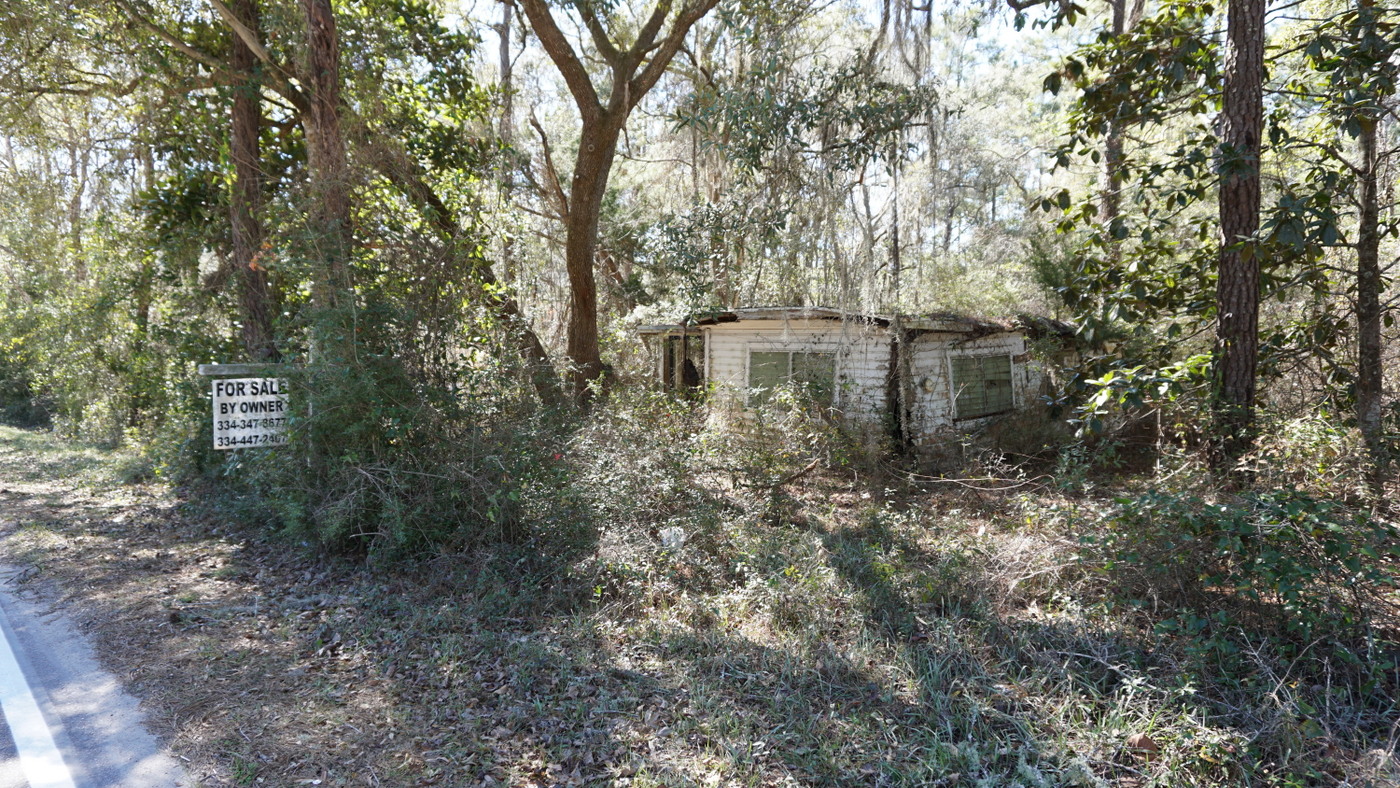 Thursday morning we were awakened by chain saws and a very noisy tractor pulling branches along the driveway behind the Trend.  It seems the live oaks are dying out and branches are dropping on the road. It's not surprising the oaks are dying as they have built so many park homes there is not much room for the trees. We moved to another site and doubled up with another couple. One member of our group was forced to move out of their site so they could cut off branches. We had a good time with many of our old and new friends. I took a walk one morning and got another annual photo of my favorite dilapidated house for sale by owner. The price has gone up to $160K now. Get it while you can!. Many people toured the Trend. That night I gave a slideshow on two of the trips we took last year, Big Bend National Park and Grand Marais-Alexandria Bay. I was amazed to learn that Big Bend can be over 100 degrees in March.  We had nothing but 60 degree weather in early March. At this point on Saturday we have had hot water showers and 5 nights of running the furnace. The level still shows full so the future for our propane looks good. I did a video interview with Gerald Keene which I will post on YouTube after the 18th when a new month starts on my Verizon data account. Gerald has invented a neat way to not waste water while waiting for the Instant Water heater to warm up. 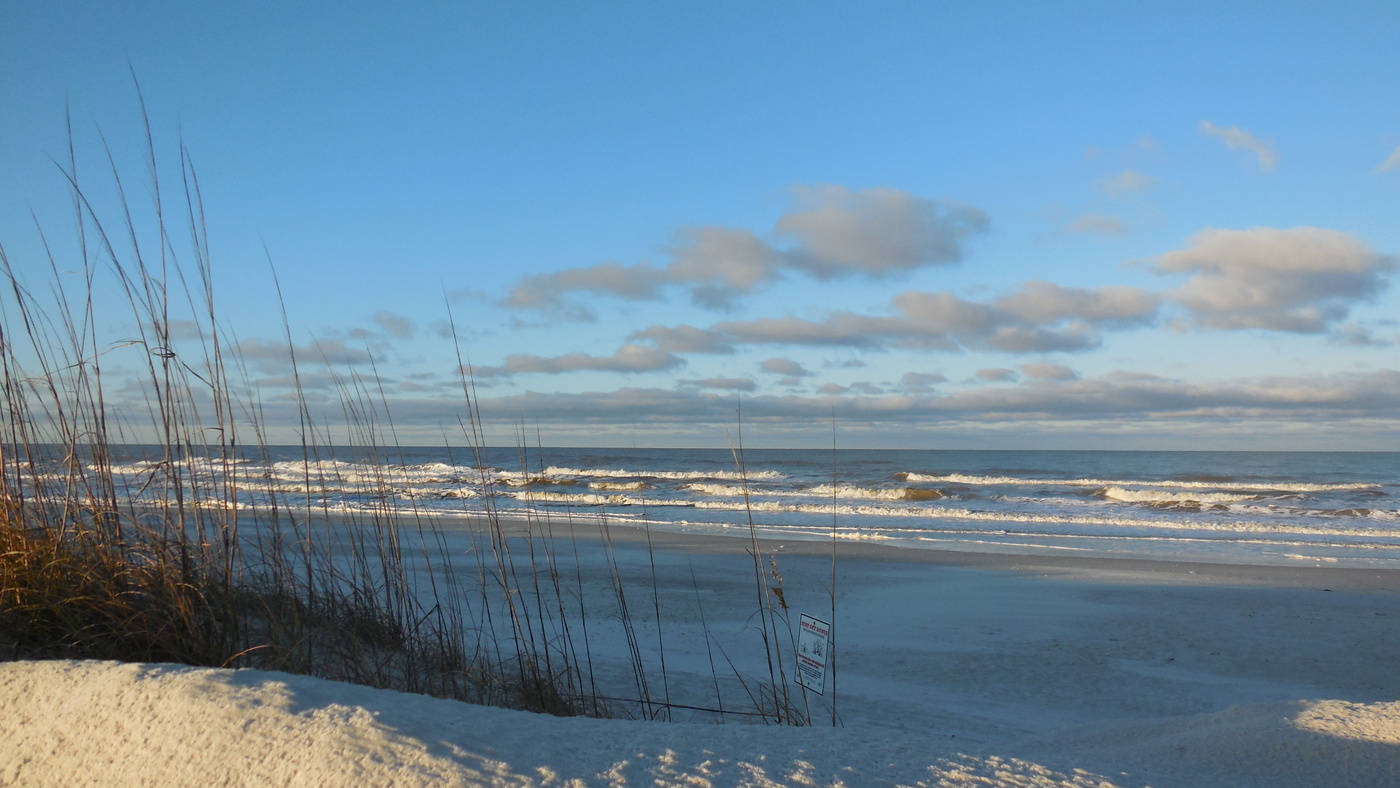 Sunday we drove to St Joseph Peninsula State Park. It's great place to walk on the beach and the walking trail beside the water and marshes. There were no empty sites last night but people left in great numbers this morning on Presidents' Day.  One of our friends from the Rally, Cindi, parked right beside us for happy hour. Last night we had the most violent storm with pelting rain and high winds that rocked the Trend. 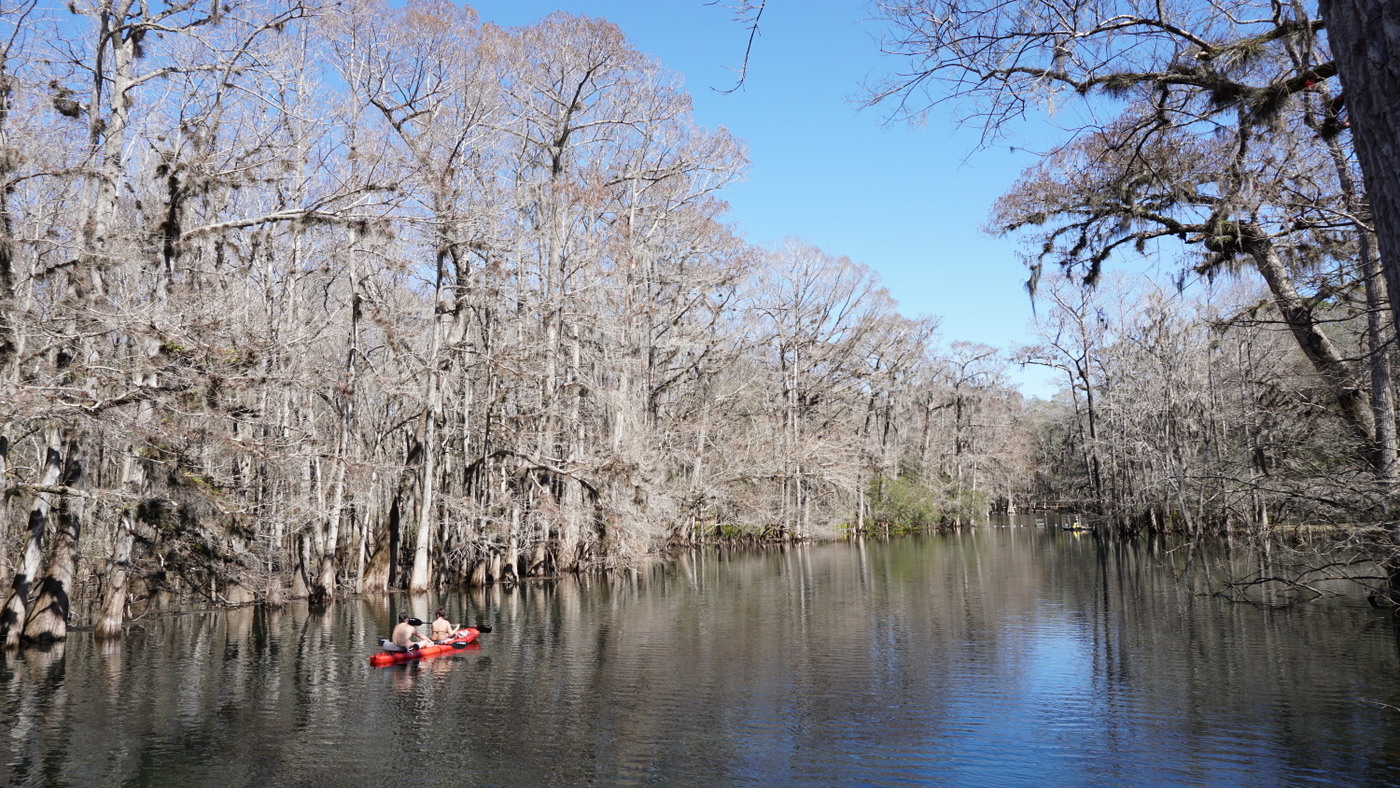 Today there were no "walk in" sites at Manatee Springs State on the Suwannee River but we did walk by the river and saw one manatee ripple. We are at the Chiefland RV Park tonight. Tomorrow we head for Cedar Key.

Veb When do you plan to be in the Tampa area? Would love to see you and Mavis!