We left Nashville at 1:00 PM after a board meeting I attended. We drove through Louisville missing the worst of the traffic and spent the night in Jerico County Park in Smithville KY. It was quiet, inexpensive, primitive, and had three free spaces. The rest of the spaces were occupied by permanent RV renters. The photo of the fuel supply shows just how primitive the park is. 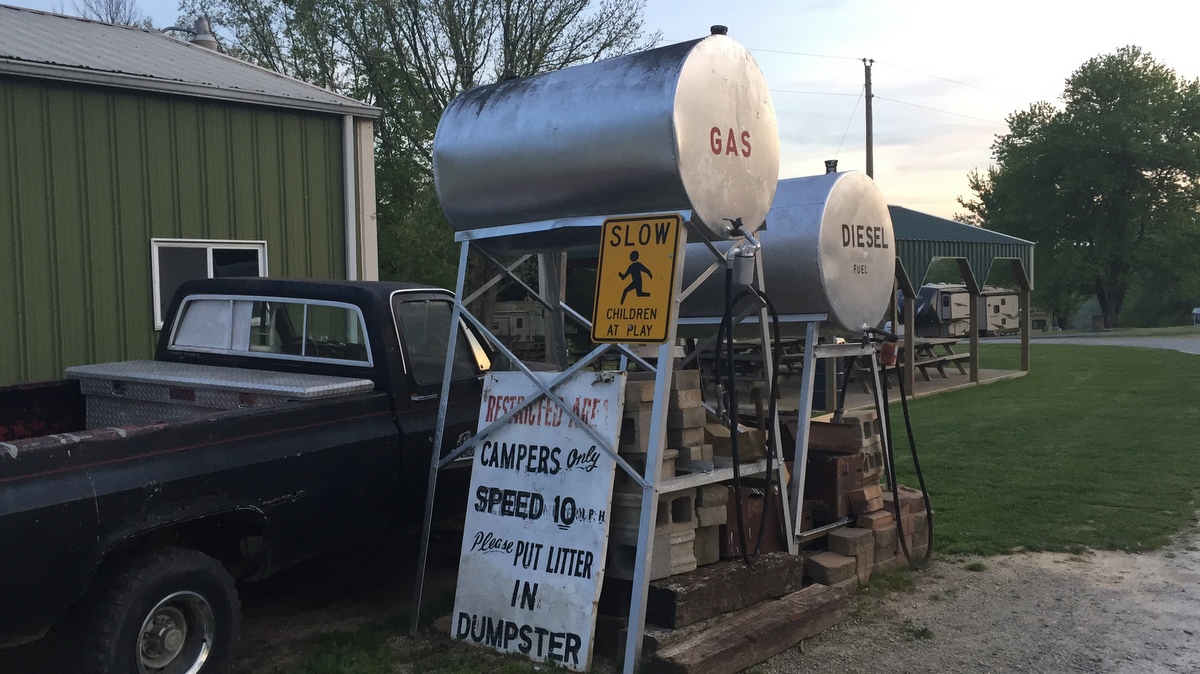 Click on any photo to enlarge them. We needed to stay at least an hour away from Cincinnati so we would miss the rush hour traffic there. Our strategy worked and we zipped through Cincinnati and Columbus. Our next stop was the KOA Erie PA which had just opened for the season. The next day was the New York Thruway toll road which doubles the car rate because of our height rather than the number of wheeks or axles.  We arrived at Syracuse and drove another 10 miles north to Brewerton’s Oneida County Park at the West End of Lake Oneida.  We followed the GPS instructions and arrived at the park. The signage to the campground seemed to be missing so we headed in assuming we would find the campground. 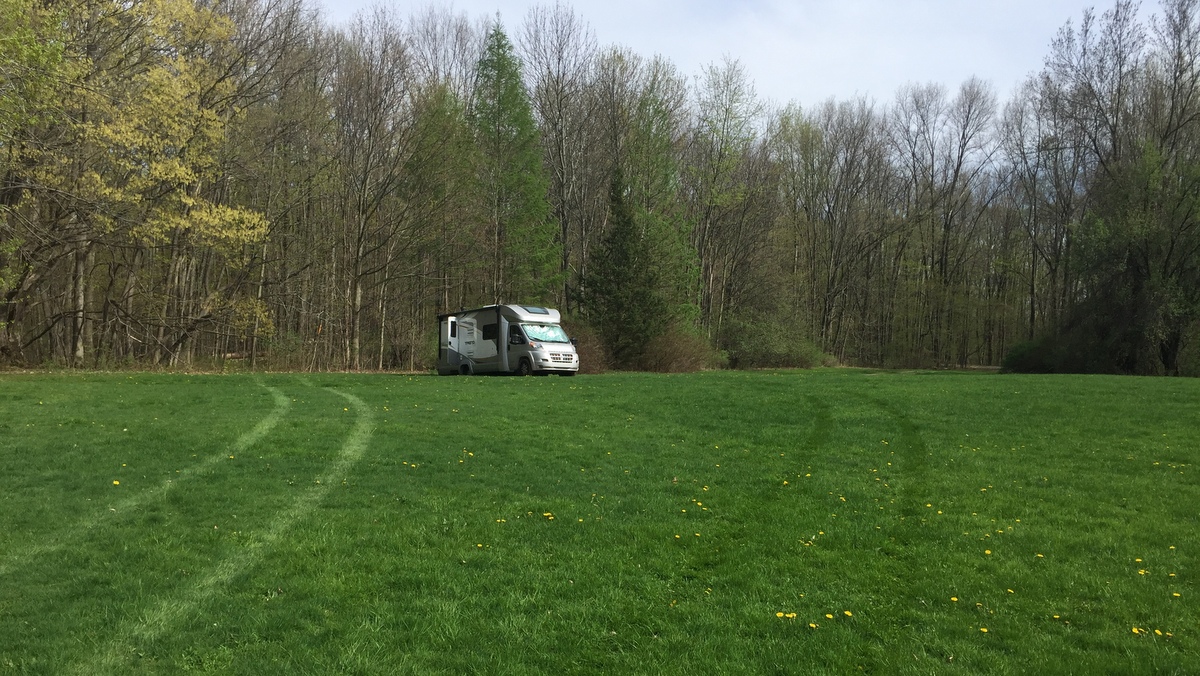 When the road petered out to gravel I decided to turn around. However the ground was very wet and the tires on our front wheel drive just spun around and dug us in deep. We had to wait a couple of hours for a tow truck and when the park manager came by I learned that there are two parks but the GPS only goes to the headquarters park. The park on the Lake is a couple of miles away. The tow dragged us out of the mud and we found the park. We met a nice couple in a View RV and had a great time comparing RVs. Their View was brand new and they had already travelled 10,000 miles or so in two months. Their summer home is on Lake George in the Adirondacks. It’s 180 miles from Brockville and we have a standing invitation to visit them.. The next day, Saturday, we finished the trip to Brockville, clearing Canada Customs in 5 minutes or less.

Life in the condo was best described by the electrician we had over this morning who asked “When are you moving in?” 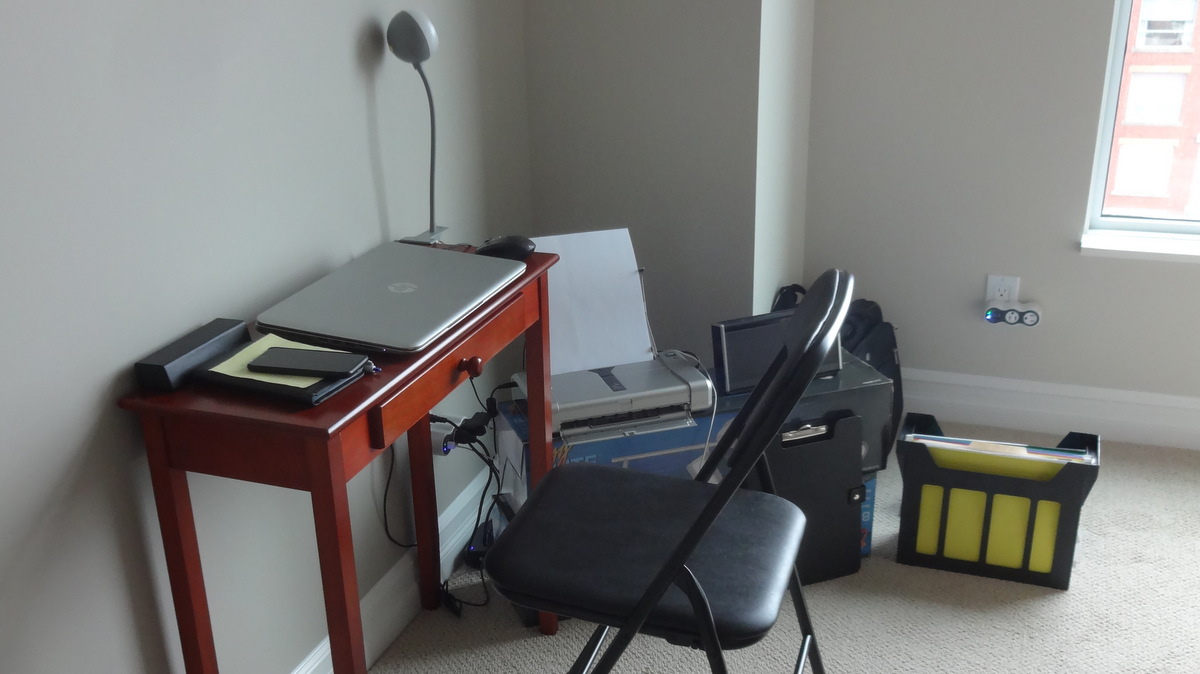 That was a bit insulting because we have two beds, a couch and a small table that now is the Duthie Learning world headquarters (see photo) for this month. There are also two folding deck chairs from the Katy Leigh and another wood old fashioned deck chair that Mavis uses. All our appliances and window drapes were installed and working with minor exceptions. We have two chairs and two headboards on order. Every day has been spent installing lights, towel bars, and TP holders. We are a block away from the downtown and get lots of exercise shopping there.  There is a DVD store that sells movies for $1 each. You can bring them back and get 50 cents each. It’s a better deal than Netflix! 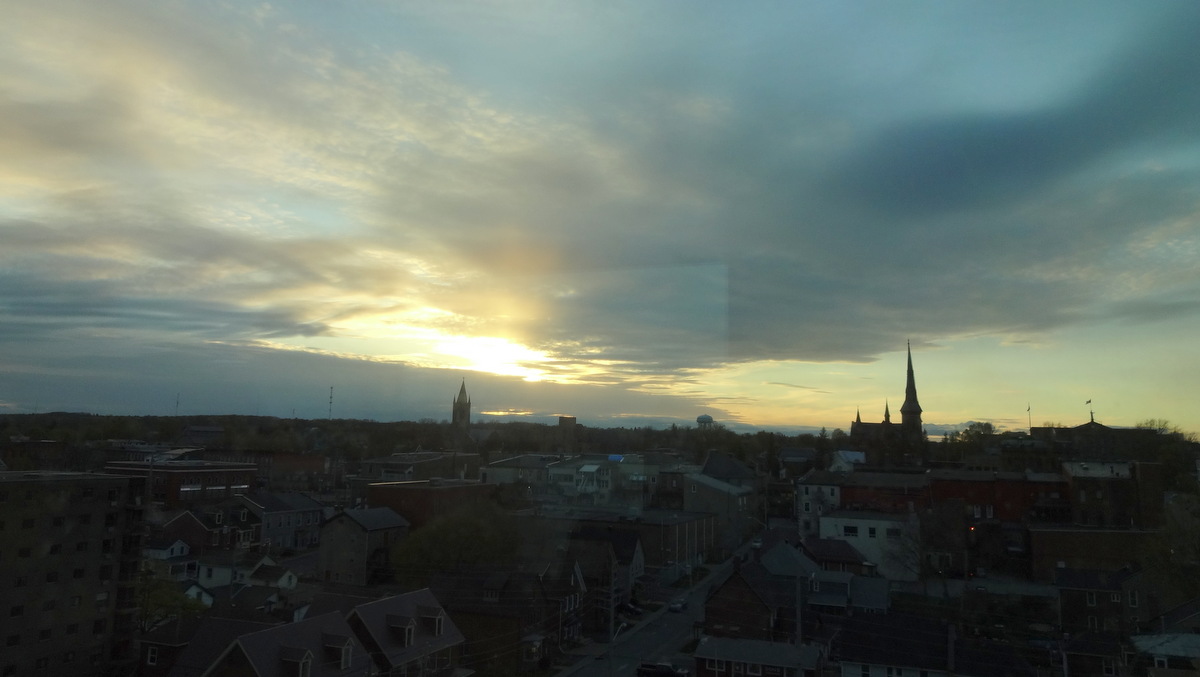 This photo was taken at sunset out our north facing window and shows some of the church steeples in town. Having lived here in the 60s and 70s life has changed very little except for everyone being older. We are renewing past friendships and making many new ones with people in the building most of whom are in the 60 to 92 age group. Every weekday morning I attend the Geezer group for coffee, meeting 2 to 6 local residents. This is how I learn who to call for help. One member invited me to park the RV on his property.  Since then a resident told me about another place that is much closer where he keeps his 37 ft. motorhome. We moved our RV there this afternoon. Today I was invited to the ROMEO group that has lunch in different restaurants every Thursday. The group name means Retired Old Men Eating Out.  Tonight we had dinner with a group of 12 residents and had a wonderful time.  Last Sunday the Geezers brought wives and a sister for brunch in a very good restaurant beside the Tall Ships Landing. The sister turned out to live in Toronto one block from the house I grew up in. She said real estate prices have gone crazy and our old house sold for $4 million (CAN$)..

Last Thursday, May 4th was launch day at the Brockville Yacht Club (BYC).  Forty years have passed since I last attended launch day, also known as the happiest day of the year. 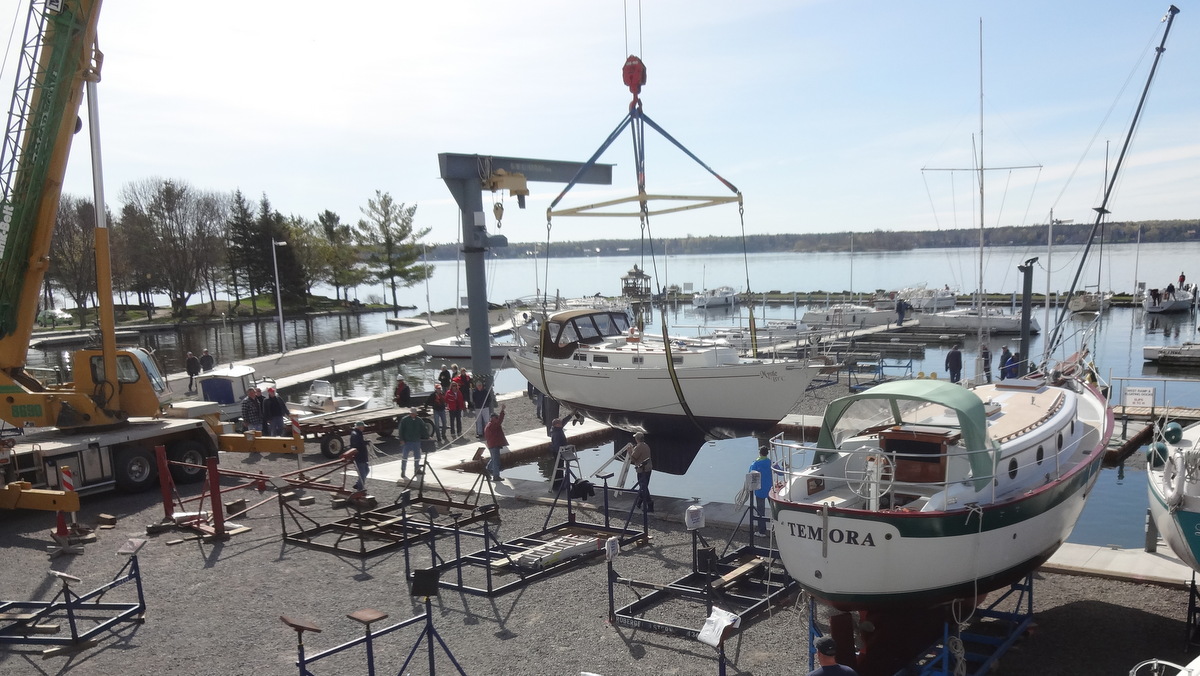 A huge crane is used to pick up and place each boat in the harbor. Our first large boat, a 1968 Fjord, still looks great and was one of the boats to be launched. It’s owned by the man I sold it to in 1978. One old steel hull sailboat started leaking badly and had to put back on the parking lot. A few days later after three days of steady rain the water in the St Laurence River had risen to record depths and the power to the marina had to be cut off. Today was the first sunny day.  The river water level is dropping and things are drying out.

Good to catch up with your travels. Love the ROMEO group

We have a new grand daughter

, Ava Michelle, born on April 15. She is adorable- said without bias of course. Tom left NC on April 29 and returned to Mobile to take the boat to GTB with the help of a friend.  I fly home Monday. Let us know when you will be at the lake this summer.

I have had you and Mavis on my mind recently and it was wonderful to hear from you. Sounds like you are adjusting to the move quite well. Really miss all of the good ole days at Kenlake; have wonderful memories to take with us on our life journey.

Wishing you both the best! Hope we can see you soon when you return to Nashville. If you ever find yourself at GTB, please call.